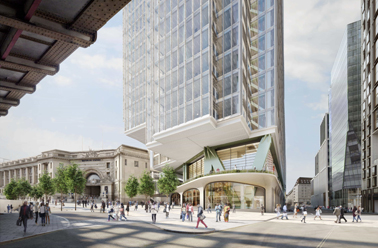 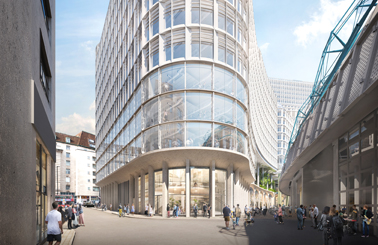 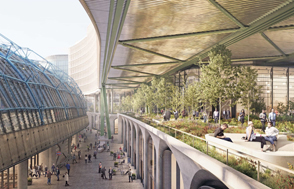 Lambeth Council’s Planning Applications Committee has unanimously voted in favour of a proposals for the redevelopment of Elizabeth House in Waterloo.

The proposals got the nod on Tuesday October 15.

Designed by Stirling Prize-winning architects AHMM, the plans will create around 1.2 million sq.ft of workspace supporting up to 11,000 jobs.

The project will also see the creation of brand new retail and a transformed public realm next to Waterloo Station, which is the UK’s busiest train station.

A key feature of the proposed project is a one-acre, publicly accessible garden promenade, directly connected to the Waterloo Station concourse level and a new pedestrianised street – the ‘Curve’, will also provide a major new pedestrian street for the area and be lined with shops and cafés.

These improvements will provide desperately needed new access routes into Waterloo Station and help to accommodate the 30% passenger growth that is predicted over the next five years.

The current Elizabeth House building dates back to the 1960s. It was acquired by HB Reavis in May 2017. The first phase of work in the rebuild will commence in 2020.

Waterloo is a designated strategic location at the centre of London. It used to be a prime office location but has seen a decline in the number of jobs and there is a lack of high-quality office space needed to attract major employers to the area.

The landscaped promenade will provide an acre of green space, open to the public and accessible directly from the Waterloo Station concourse as well as from York Road and Waterloo Curve.

Plans are to revitalise the unused space between Elizabeth House and the former Waterloo International Terminal to create a new pedestrian street linking Victory Arch Square and Leake Street.

A new gateway into Waterloo Station

Given the site’s location with four major tube lines running beneath, the building requires an engineering solution which has been designed by Robert Bird Group.

There will be sensitivities around height at Elizabeth House but it is proposed that tallest element of the building we is comparable in height to the consented scheme and the Southbank Place development.

The proposed development will encourage people to cycle to work by creating an environment in which cyclists are prioritised along with pedestrians. Lifts and escalators will be introduced to aide those with walking impairments and wheelchair users.

One of the really interesting aspects of the Elizabeth House development will make it the first building in Lambeth to use a ‘consolidated servicing’ strategy. This is intended to create as little impact on the local area as possible so that there fewer delivery vehicles accessing the site during construction and once the building is in use.

A proportion of deliveries will go via a ‘consolidation centre’ located outside of Lambeth. Here, goods from different suppliers will be ‘consolidated’ into a smaller fleet of delivery vehicles which will then bring them to the building.

The plan is also to use low emission or electric vehicles to reduce the impact on air quality.

Picture: Different views of the proposed new Elizabeth House - and below, the existing building.