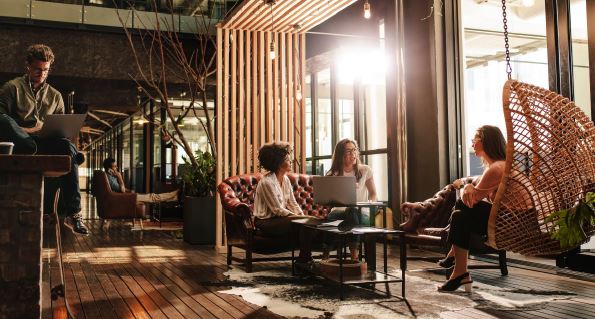 Co-working spaces have helped London become the No.1 destination for Generation Z workers according to the 2019 Generation Z city index.

London scored a perfect '100' for co-working spaces beating New York (98.12) into second place. In fact, London now has over 1,400 flexible workspace locations according to the latest data from global workspace brokerage Office Freedom.

Generation Z is the term given to anyone born between 1997 and 2012, and who are 'digital natives that value security, diversity and autonomy and aim to achieve it through pragmatism and determination'.

The oldest members of Generation Z graduated from university this year. The cities on the index are becoming career destinations for Gen Zers looking for the best places to live and work.

The study examined 110 cities and measured 22 factors under four broad headings: digitisation, business, principles and leisure. Each city was given a score out of 100, the total of the weighted averages of each of the four categories.

London and Manchester make it into the Top 20. 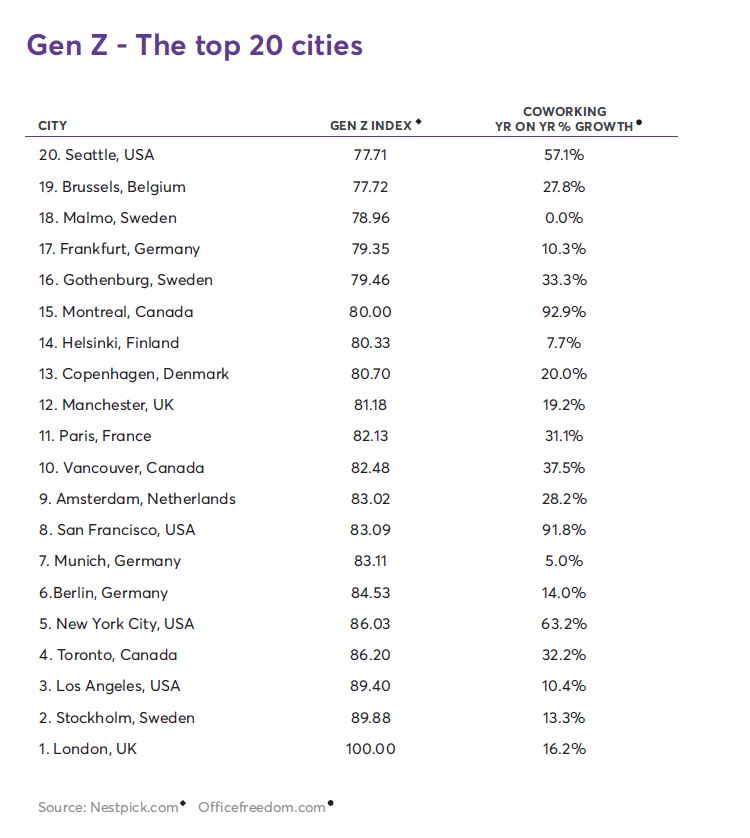 The growth in flexible workspaces is a common theme among the Top 20 Gen Z cities with an average 22% growth in co-working space. The global co-working market has more than doubled since 2015 and is expected to top 25,000 spaces by 2022.

Latest research from Zion Market Research values the global flexible workspace market at $26.9 billion and predicts it to growth to $111.68 billion by 2027.

Office Freedom recorded a 16.2% year on year growth in London co-working spaces between August last year and this. London remains the co-working capital of Europe with over 11 million sq.ft of flexible real estate. In London a new co-working space opens every five days, placing the city at the top of the global league.

Flexible workspace is naturally appealing for entrepreneurial Generation Zers as it represents a low risk, affordable way into office rental. Co-working has long been the preferred route for freelancers and start-up businesses but is now also attracting big businesses too. Companies wishing to attract the best talent from amongst Generation Z workers should note that although office location is very important, office features such as natural light, kitchens, modern facilities, décor and outdoor space are high on the wish list.

Outside of the co-working appeal, London is also the No. 1 city for Generation Z because of its ability to meet educational needs and provide strong business opportunities.

Berlin is the only city in the top 10, which does not fall into the top 50 cities with the highest cost of living.

Stockholm comes second for Gen Zers, and is the number 1 city for digital payment & banking and environmental action. Stockholm also scores the highest marks when it come to the Right to Protest.

“Taking a values-centric approach to this study, we looked into which cities around the world best understand, advocate, and embody the principles Gen Zers prioritise,” said  Ömer Kücükdere, Founder and CEO of Nestpick.com. “Interestingly, despite the uncertainty surrounding Brexit and the high costs of living, our research has found that London ranks first overall. Adding on to the advantages of a weakening Pound, London has shown how it is at the forefront of digitalisation, advocacy, entertainment, and business. Brexit or not, London has the foundations to continue magnetising Generation Z in the long-term.”

How the study was conducted

A shortlist of prominent, international cities were selected based on their reputation as destinations to pursue work and education, as well as those who have shown initiative to act on the demands of previous generations such as Millennials and Generation X. Originally, 100 cities were chosen for the final index, however 10 additional locations that are rising in economic strength were included in order to offer a more representative overview. The final selection of 110 cities is further based on the feasibility of collecting extensive, reliable data for the factors used to assess their livability, as well inclusion at a global scale.

Digitalisation was first measured through the integration of technology to everyday life such as e-governance, connectivity, and e-banking. The extent to which a city supports Gen Z values was then scored based on social equality, multiculturalism and climate commitment. The prevalence of e-gaming events and concerts was accounted for in a Leisure Score. Finally, a business score was evaluated based on the entrepreneurial spirit fostered by a city through factors such as affordability, the density of social enterprises and co-working spaces.

The final result is an index composed of 22 indicators ranking cities worldwide based on their recognition of and initiatives to prepare for this new, up-and-coming generation.

For the complete methodology and full data set - Click Here