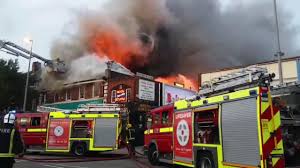 Fifteen fire engines and 97 firefighters and officers tackled a blaze at a discount store on Old Church Road in Chingford, Essex on the night of Aug 23.

The whole of the first floor and roof has been gutted by the fire. Also most of the ground floor was also affected by the blaze.

Station Manager Danny Meakin who is at the scene said: "The fire has severely damaged the store, rooms above and roof. Firefighters are working hard to contain the fire and stop it from spreading. Crews will be at the scene throughout the night damping down pockets of fire.

"A mother and daughter in an adjacent flat saw smoke and evacuated the property unhurt."

On the evening before - Aug 22 - four fire engines and 21 firefighters and officers were called to a basement fire in an office block on Canada Square in Canary Wharf.

The fire damaged a small part of the basement and around 200 people left the building before the Brigade arrived.

The Brigade was called at just before a quarter to six by just after 6:30pm.

An arsonist who torched a historic landmark in Wythenshawe, Manchester has been jailed.

Jeremy Taylor was sentenced on Friday 18 at Manchester Crown Court, to four-and-half-years after setting fire to the Grade II Wythenshawe Hall.

The court heard how shortly before 3.30am on Tuesday 15 March 2016, Taylor used newspaper and matches to start five separate fires around the Tudor manor.

One of these locations was right in front of the oak entrance door which caused the majority of the estimated £5 million worth of damage.

Firefighters tackled the blaze for hours before being able to bring it under control.

No one was injured but a large part of the roof and upper floor of the timber-framed 16th century home was destroyed.

Inspector Luke Breakspear from GMP's City of Manchester Team, said: "This was a mindless act that intended to destroy a historical building that has great significance to the people of Wythenshawe. People were shocked by the needless damage caused to a piece of our local and national heritage.

"Taylor's senseless actions could have taken an innocent life and I am just thankful no one was hurt."

Superintendent John-Paul Ruffle, Silver Commander for Pride, said: “Once again we are getting ready to join in with this year’s Manchester Pride Festival celebrations and are looking forward to welcoming visitors into our fantastic city.

“To mark the occasion we will be flying the rainbow flag outside our Force Headquarters to show our support. The flag will be raised by the creator of the ‘Bobby Dazzler’ - the sparkling customised police helmet which made its first appearance at Pride last year.

“As with each year we, alongside colleagues from neighbouring forces, will be leading the parade with the rainbow police car taking centre stage.

“I understand that Manchester people will be horrified by the recent events in Barcelona and our thoughts are with everyone affected.

“Whilst there is no specific intelligence of any threat to the LGBT community, or to Greater Manchester, officers will continue to work closely with members of the LGBT community, including independent advisors, local partners and the night-time economy, to offer on-going security advice and additional reassurance."

Omicron Variant ŌĆō What are the Facts?