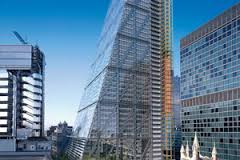 Yet another bolt has fallen from the Cheesegrater building in London causing some embarrassment to owners British Land who had revealed a successful investigation into why two other bolts had sheared off the massive structure. The firm made the announcement at the same time as revealing another tenant had taken space at one of the capital's most prestigious locations. Some might think the simultaneous announcements were timed so that one might over-shadow the other...a plan that failed when a third bolt was discovered to have come away and been caught by 'netting' places around the 47-storey Leadenhall to prevent the drastic consequences of a bolt falling to the ground.

According to news reports, tests have found the bolts fractured because they had not hardened properly.

A statement from British Land reads: In November 2014, we reported that two bolts had fractured at the building. Investigations undertaken by contractor Laing O’Rourke and structural engineers Arup have now been completed. These confirm that the problem is limited to certain bolts. Arup has also confirmed that there is no adverse effect on the structural integrity of the building. A programme to replace a number of bolts will take place as a precautionary measure.

British Land and Oxford Properties have leased a further 93,400sq.ft at The Leadenhall Building. This includes the building’s architects, Rogers Stirk Harbour + Partners who have signed a binding Agreement for Lease for level 14. A further five floors are also under offer in three additional transactions. This brings the total office space let or under offer to c.70%.

RSHP, which will relocate from their current home at Thames Wharf Studios, Hammersmith, is taking a 15 year lease with 10 year break for level 14. At 18,000sq.ft this was the largest remaining floor at the building. They join global insurance broker Aon, insurance company Amlin, specialist pensions insurer Rothesay Life and worldwide serviced office provider Servcorp.

Tim Roberts, Head of Offices at British Land said: “RSHP's decision and the ongoing interest reflects both the attractions of the building and the changing face of the City, appealing to an increasingly diverse mix of occupiers.”

Mike Rayner, Head of Development at Oxford Properties said: “This is a world class building, which is attracting high calibre occupiers across a broad range of sectors.”