A Home Run for Sustainable Stadia 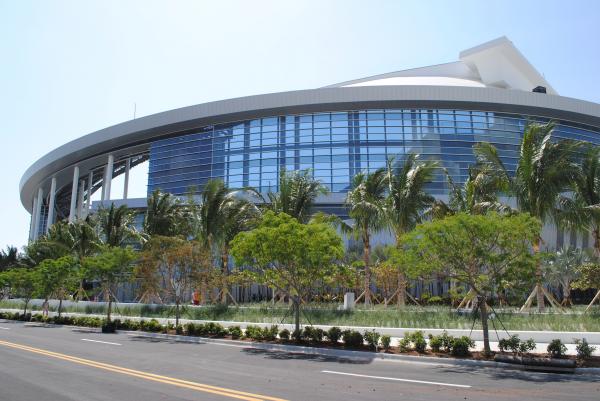 Marlins Park is considered Major League Baseball’s most modern looking new par, and as the first retractable roof structure in the world to earn LEED Gold Certifications, it is also the league’s most environmentally sustainable. Viracon glass contributed to both its 21st century aesthetic and its cutting-edge energy performance.

The 37,000-seat facility was constructed on the site of the former Orange Bowl, in Miami’s Little Havana. Its design, by Populous, embodies the vibrancy of that community with an electric colour scheme and abundance of artwork in tropical colours. The park’s architecture also acknowledges the $550 million park’s proximity to the coast. The curves of its metallic and glass exterior evoke images of the ocean – an effect accomplished in part thanks to Viracon glass, which was used on storefronts, an elevated bump out and luxury boxes in the park.

“We aspired to create a sculptural building. The flowing white plaster and reflective metal forms contrasted by transparent colour reflects this objective,” says Greg Sherlock, Principal of Populous. “Viracon glass substrate combinations allowed us to graduate the colour with a deep blue hue at the lower sections of the building and lighter aqua hues rising into the horizon.”

The color graduation was achieved by silk-screening Viracon’s insulating laminated VE26-42 glass. The glass also allows for a high visible light transmittance, at 24%, which further enhances the park’s modern aesthetic.

The 120,985sq.ft of glass used also contributed to the park’s environmental sustainability by bolstering its energy performance.

This week ending Friday October 7 saw Atletico Madrid announce that Philips Lighting will supply the lighting of the club’s new stadium in the Spanish...

40% of businesses are expected to die in the next 10 years if they donÔÇÖt figure out how to embrace new technologies. The white paper looks at the notion of streamlining payroll and how integrating basic time and attendance workforce data with a cloud-based automated payroll system can benefit cleaning and FM service providers. Click image to read more.

StreetDots is the worldÔÇÖs first and only booking platform for creating vibrant mobile catering, retail and even wellbeing opportunities for FM and property managers in London and Manchester - all with no charge to the land operator. To Read More - Click The Pic