A Lesson in Education Estate Management 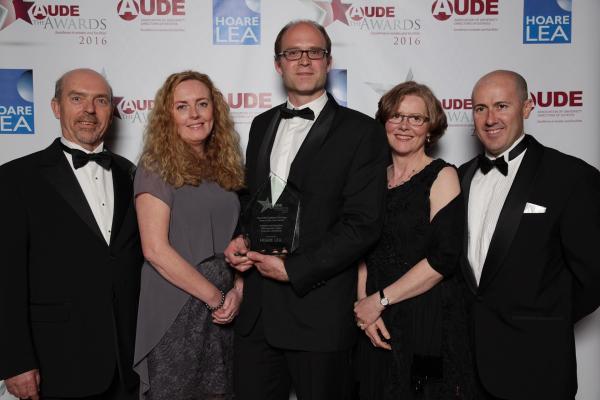 The 2016 Higher Education Estates and Facilities Awards took place at the Gala dinner on the final night of the annual AUDE conference held at Exeter University recently.

Each year the awards celebrate and highlight the achievements of universities and best practice in the industry, including those who lead the way in estate and facilities management.

The judges were on the lookout for teams, projects and individuals who have made a significant contribution to ensuring university estates provide best value to support the institutional mission and promote efficiency and effectiveness.

The awards were hosted by architect/TV presenter George Clarke.

This year the AUDE University Impact Initiative of the Year Award went to The Consultants and Estates project team led by Neil Stubbs, Manchester University. This award recognises a specific initiative having a significant positive impact on the institution, the sector and/or the profession. The team at Manchester University impressed the judges with their way of engaging with the community to deliver a 76,000m.sq new build. When completed in 2019, it will provide a new campus for 8,000 staff and students in four schools and it is this extensive work on a large scale that won them the award.

2016’s AUDE Emerging Talent Award went to Kelly Grimes, University of Liverpool for her work in redesigning the VfM data collection process at the University. She reinforced the positive VfM culture and ensured it remained an integral part of University business.

The AUDE Estates/Facilities Team of the Year Award was presented to the Swansea University Estates and Facilities Management Team for their work and mazing collaboration with the industry. They demonstrated estate leadership within a multi-disciplinary commercial project, one of the largest and most significant projects in its 100 year history. The £450 million, one million sq.ft Science and Innovation focussed Bay Campus relocated more than 30% of the University’s community and saw the institution operate across multiple campuses for the first time.

One4All has called for property and construction businesses to recognise staff in free the free Spotlight Awards. Nominations are open now and close on July 6. Every...