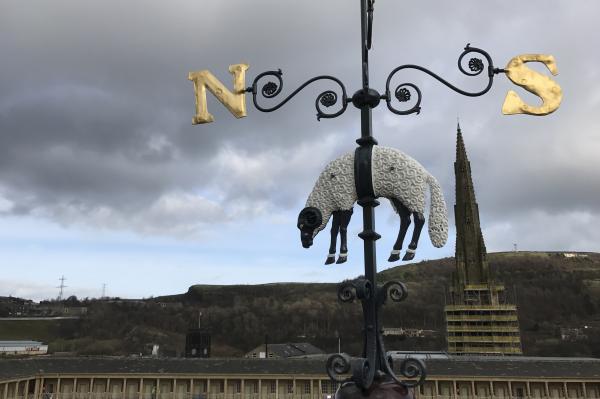 The Piece Hall in Halifax, one of the most iconic heritage buildings in Britain, has re-opened its gates following a multi-million-pound transformation.

The monumental Georgian structure, which was once the centre of the global woollen trade, will be a contemporary leisure, retail, cultural and heritage destination.

The transformation has been made possible by funding from Calderdale Council, a £7 million grant from the Heritage Lottery Fund and support from the Garfield Weston Foundation and the Wolfson Foundation.

At 10:00am on August 1, Halifax-born British wheelchair racer and Paralympian Hannah Cockcroft MBE rang The Piece Hall bell which used to mark the start of trading - which began in 1779. Members of the public were able to explore the Grade 1 Listed building and experience the immense, open air piazza (once used for the trading of cloth) which is now enclosed by a mix of independent bars, shops and cafés.

It will provide a backdrop for a seasonal programme of events which will attract an estimated footfall of 1.6 million through the gates every year.

Nicky Chance Thompson, Chief Executive of The Piece Hall Trust, an independent charity formed to manage The Piece Hall, commented: “For anyone that has yet to experience The Piece Hall, it’s not easy to get across the scale and grandeur of the place. It brings to mind Covent Garden’s floral market with a grand courtyard that is reminiscent of Somerset House, combined with magnificent Italian-style architecture.

"Given the 200-year history of the building and scale of the transformation, it’s incredible that until now, it has been one of the North’s best kept secrets.”

The opening marks the culmination of an ambitious three-year transformation project delivered by Calderdale Council and designed by LDN Architects. Key elements of the conservation and build programme include the careful restoration of the 18th century stonework and the upgrade of infrastructure and services to convert the original 315 units (once used for storing cloth) into retail and public facilities.

The sloping central courtyard has been levelled, creating one of the most striking piazzas in Europe measuring a 66,000sq.ft and with a capacity for up to 7,500 people.  The courtyard features new lighting, seating and two cascading water features which sit within the north-west and south-east corners and subtly interpret the historical importance of water in the production of cloth.

Cllr Barry Collins, Calderdale Council’s Deputy Leader, said: “The transformation is now complete and we’re looking forward to hearing people’s reactions as they see the impressive changes for the first time.  Our ambition for The Piece Hall was to conserve the building for future generations, whilst creating tourist attraction that would strengthen the local economy."

Ros Kerslake, Chief Executive at the Heritage Lottery Fund, added: “The Piece Hall and its courtyard are pivotal players in the history of Halifax and West Yorkshire.  Our investment of £7m of National Lottery players’ money has been integral to its redevelopment and means that it can be enjoyed much more widely than before.  Whilst it’s lost none of its character as a vibrant 18th-century trading place, it’s now a much more welcoming civic space where people will be able to work, meet, learn and relax.”