Acting Against Carbon is the Goal 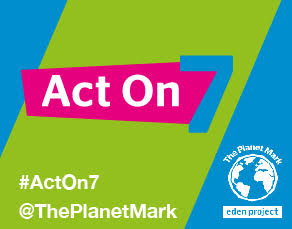 Act on 7 aims to address the needs of organisations that want to take action on their carbon footprint but either do not know how to or are struggling to make year-on-year improvements on their carbon reduction programme.

Organised by The Planet Mark, it has been designed to provide them with easy-to-understand tips, guidance and tools as well as what are described as ‘inspiring stories and compelling case studies’. Topics covered will be wide ranging and include everything from carbon foot printing to driving up efficiency, to full involvement and innovation.

The Planet Mark is a certification programme that helps businesses reduce their carbon footprint, requiring them to make a commitment to reduce their carbon emissions on an annual basis. Latest analysis by Planet First, the sustainability consultancy that provides The Planet Mark in association with Eden Project, shows the business sustainability certification programme is helping customers reduce their carbon footprint on average by more than 7% per employee, per year. The cost savings associated with those savings come to more than £100 per employee.

“We want to empower organisations and their individuals to make ongoing progress on their carbon footprint,” said Steve Malkin, CEO, The Planet Mark. “That’s why we’ve launched Act On 7, a campaign to get business to cut carbon and beat our record of 7%.”

Act on 7 has received much of its inspiration from the recent Paris Climate Deal (COP21) which committed countries to keep the global temperature increase ‘well below’ 2C and to pursue efforts to limit it to 1.5C. Under the deal, countries are expected to set increasingly ambitious targets for cutting their national emissions and to report on their progress every five years.

As part of its commitment, The Planet Mark has pledged to help its existing customers cut their carbon footprint per employee by 10% or more a year.

“COP21 was a turning point for nations coming together with pledges for how they plan to reduce greenhouse gas emissions,” explained Jane Burston, Head of Climate and Environment, National Physical Laboratory who sits on The Planet Mark Advisory Panel. “For those businesses that are yet to set their own emissions reduction targets, they will need to start measuring their carbon footprints so they know where they are starting from. Tools that support businesses to do this simply and easily are going to be very much in demand.”

The first Act On 7 resources to be published are a Beginners Guide to Carbon Footprinting and a downloadable Carbon Savings Calculator.

Picture: Act on 7 is aimed at organisations and businesses wishing to take concrete steps to reduce their carbon emissions