Action and Roll 'em for Pinewood 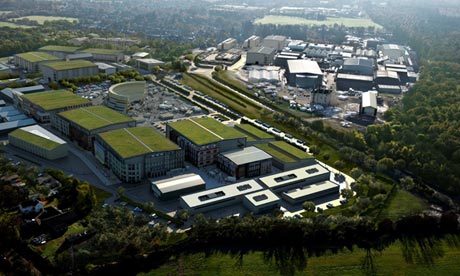 The owners of Pinewood Studios have been celebrating the outcome of their appeal for a substantial expansion of the world famous centre for film making.

The decision by Eric Pickles, the Secretary of State for the Department for Communities and Local Government (DCLG), to overturn local planning refusal by South Buckinghamshire Council, means a huge redevelopment has been granted, despite acknowledgement that certain aspects of Green Belt policy had to be put aside.

The Pinewood Studios Development Framework (PSDF) is a £200 million, long term scheme of ‘national significance’, designed to address increasing international demand for production facilities in the UK and deliver growth for the next 15 years.

It comprises expansion of the existing Pinewood Studios by adding a total of 100,000sq.m of new facilities, including 12 large stages with supporting workshops, production offices and infrastructure.

The scheme will, according to Amion Consulting, have a positive impact on the economy and that it would:

The original plan submitted by the owners would have seen the building of up to 1,400 new homes. Approximately 420 of them would have been ‘affordable housing,’ but this was deemed ‘inappropriate’ by the inspector reporting to Pickles.

Ivan Dunleavy, CEO, Pinewood Shepperton plc stated: “This is a critical opportunity for the creative industries and particularly for the UK film industry. Global demand for filmed entertainment is increasing and the UK remains one of the leading destinations to produce creative content.”

For its part, South Buckinghamshire Council appeared to admit defeat on its website. "Of course, we are very disappointed that the Secretary of State rejected our decision to refuse permission for this development,” stated Cllr Roger Reed, Cabinet Member for Sustainable Development. “We had extensive and well informed objections from the District Council, Parish Councils and others to the scheme but we must now look forward and recognise the importance of Pinewood and the benefit they can bring to the local and wider economy."

Pictured: A bird’s eye view of the proposed redevelopment and expansion of the Pinewood Studios, including green roofs