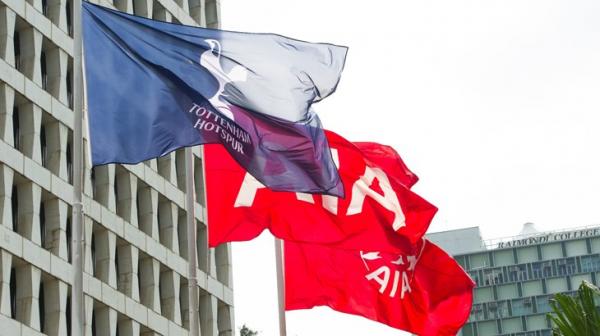 AIA Group Limited is currently flying the Tottenham Hotspur flag alongside its own outside its Honk Kong headquarters. AIA is Tottenham Hotspur’s cup competition shirt sponsor. Tottenham were the first Premier League club to secure a deal that sees one sponsor for its League games and another for its involvement in cup competitions such as the Europa League.  Spurs are in action this evening (Thursday 3 October at 5:00pm UK time) as they take on Russian side Anji Makhachkala in Moscow.

No one was available to comment as to who raised the flag but ThisWeekinFM would imagine that it was the FM team at No.1 Connaught Road Central, Hong Kong.

AIA is an international provider. The company’s brand will appear on the front of Tottenham's shirts during all of the club's matches in the Europa League, The FA Cup and the Capital One Cup.  The two organisations work together on a range of brand and marketing initiatives including flying flags ‘when the Spurs go marching in’.