All Hush for the Ideal Treehouse 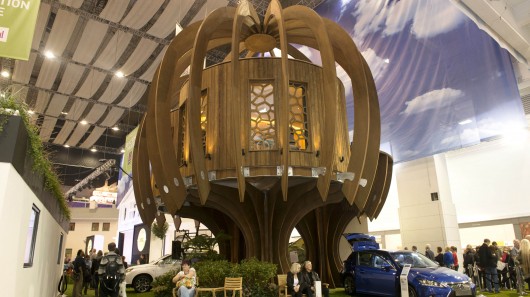 The World’s first Quiet Mark Treehouse has been unveiled at the soon to close 2014 Ideal Home Show.

The Quiet Treehouse has been designed by Blue Forest Luxury Treehouses and will be donated for permanent use by Chestnut Tree House, the children’s hospice in Sussex.

A not-for-profit organisation, Quiet Mark is the international mark of approval from the UK’s Noise Abatement Society, encouraging the design of quieter high performance technology and options to reduce unwanted noise in the environment.

Kebony has been working with Blue Forest Luxury Treehouses, John Lewis and Quiet Mark, to develop what it believes is an ambitious tree home made from Kebony wood, claimed to be a sustainable alternative to tropical hardwood and toxic treated timber. The Quiet Treehouse is currently on show at London’s Earl’s Court at the Ideal Home Show which runs until this Sunday 30th March. www.idealhomeshow.co.uk/

The technology behind the wood is a process that improves the properties of sustainable softwood species to give similar characteristics to tropical hardwoods, making it suitable for use in indoor and outdoor applications. The wood is reportedly ‘strong and durable’ and as a result, Kebony has been used for a number of high profile projects in the UK, USA and across Europe.

Kebony was seen by Blue Forest as a fitting choice for the hospice project because of its ‘strength, beauty and environmental credibility’. The silver-gray patina which Kebony develops when exposed to weather, should become an attractive quality of the wood that will add to the ambience of the treehouse when it is implanted to the tree canopy at Chestnut Tree House children’s hospice in Sussex.

Adrian Pye, Head of International Sales at Kebony said: "It has been a very exciting project for Kebony to be involved in. The design of Blue Forest’s treehouse and its use of sustainable materials throughout demonstrate how, with innovations, construction can be sustainable and integrated to complement a building’s environment.”