And They're Off - Government Backs 'New PFI' at Cheltenham 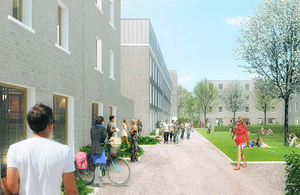 A new student village will be built at the University of Gloucestershire’s Pittville campus in Cheltenham, due to a £40 million government guarantee.

Seen by the government as a boost to its plans to get Britain building, this initial deal will use private investment that will finance this new infrastructure project – or PFI by another name.

It is the first time that a guarantee has been given to a privately financed university accommodation project and construction can now begin on the ‘village’ which will have over 570 new rooms. Refurbishment will also take place on the existing media centre including a gym, dining hall, students’ union office and over 1,000sqm of office space for university staff. Work is expected to complete in time for undergraduates for the 2017/18 academic year.

Chancellor George Osborne explained that he believed this initial deal would “deliver a modern, new student village to give the next generation of students the first class facilities they deserve”. He went on to state it was part of his Spending Review that extended the guarantees scheme to March 2021 to 'help kickstart other exciting infrastructure projects like this one right across the country'.

Nicolas Guérin Director at Uliving, explained that the initiative had 'enabled Uliving to increase our presence within the student accommodation sector and become one of the largest providers in the market'.

Relief that the scheme was going ahead was particularly clear with the statement from the University of Gloucestershire. “The university is delighted that financial close has been achieved on the scheme,” said Stephen Marston, Vice Chancellor. “This means we can now move ahead with the building work. Pittville will give our future students a great place to live with well designed and well managed accommodation and good facilities in a wonderful location.”

Picture: The student village will be built at the University of Gloucestershire’s Pittville campus in Cheltenham comes as a result of a PFI type deal