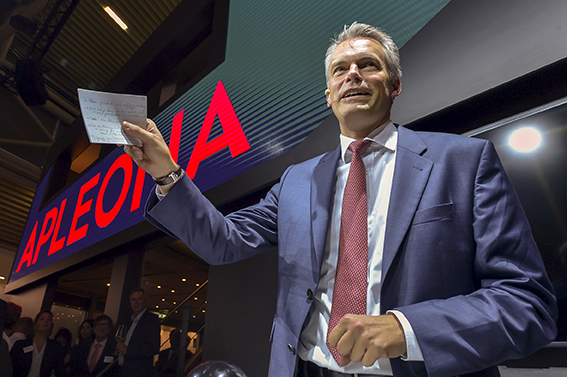 Hundreds of customers, business partners, suppliers and employees were gathered together by Bilfinger at the Expo Real in Munich to hear what the part of the company they operate within was to be called under new owners EQT.

Apleona was what CEO Dr. Jochen Keysberg (who transferred from Bilfinger) told them the new name of the Bilfinger Building and Facility segment that was sold to Swedish financial investor EQT.

Bilfinger is the massive German owned international organisation that had invested in its facilities arm (particularly in the UK where it bought a major FM supplier and also purchased real estate giant, GVA) but has decided to extricate itself from the market (and indeed from some of its industrial and oil maintenance businesses which were not part of the sale to EQT). Apleona will have its headquarters in Neu-Isenburg - perfectly placed outside Frankfurt to develop its services into Germany's financial property heartland.

Apleona's current customer spread worldwide is still biased towards industrial companies but banking and insurance as well as investment companies and the public sector are all within its portfolio. Apleona is active in more than 30 countries. Revenue of Euro 2.5 billion was generated in 2015 with 22,000 employees. Brands such as HSG and GVA will continue to operate under the Apleona umbrella.

Dr. Jochen Keysberg said: “We have found a pleasant sounding, internationally appllicable and memorable name. Our goal is to establish Apleona internationally as a strong brand for integrated real-estate services.”

Keysberg is said to want to move the internationalisation of the business units forward, deliver increasingly integrated services to customers and further expand its technical competences in the field of energy efficiency.

EQT has made its first investment into the German real estate market with the acquisition of an office park in western Cologne. EQT has developed a management team to create value through hands on asset management. The acquisition comprises 7 different office buildings located within the park.

EQT is the investment company that is credited with taking ISS from a relatively small company to the international facilities behemoth it has become before divesting itself of its interests. EQT almost certainly has the same plans for Apleona - in fact Bilfinger retains a stake in the expected eventually sell-on.

Picture: CEO Dr. Jochen Keysberg of Apleona, the company formerly known as Bilfinger, told an audience at Expo Real that they had found a pleasant sounding, internationally recognisable name