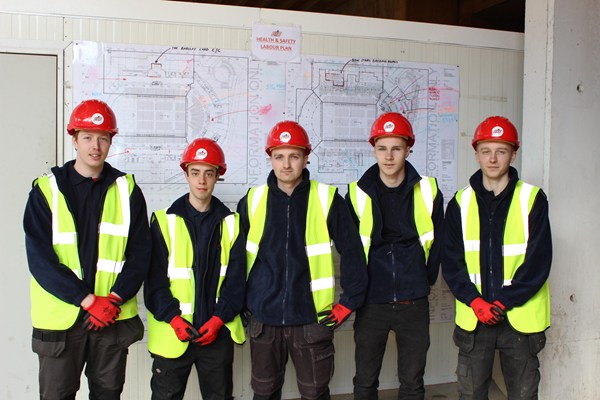 Five apprentices from Birmingham and its surrounding regions are playing a significant role in the £26million redevelopment of the NIA (National Indoor Arena), Birmingham, through their work with national building services and facilities management company EIC Ltd.

Steve Blackhall from Solihull, Andrew Dorrington from Stratford-upon-Avon, Pete Madden of Kings Stanley, Daniel Young also from Solihull and Luke Smith who lives in Shirley – all aged between 18 – 23 – are based on the NIA site via the City & Guilds course in Electrical Installation they are undertaking as part of their apprenticeships through EIC Ltd and Wolverhampton and Stratford-upon-Avon Colleges.

This major redevelopment project is being delivered by BAM Construction and EIC is supporting BAM on all the mechanical, electrical and plumbing phases of the project. Working on the electrical installation for the NIA, the apprentices’ role includes fixing sockets, making brackets and sourcing connections, amongst other key jobs.

How the lads found out

Steve, Andrew, Pete, Daniel and Luke found out about the apprenticeship opportunities at EIC through a variety of ways:

Andrew, Daniel, and Luke were targeted directly at their colleges to finish their studies through the apprenticeships with EIC, whilst Pete and Steve were made redundant from previous companies and actively sought out the opportunity.

Assessment of their City & Guilds is a mixture of on-site work, plus one day a week from college, with direct mentoring by fully qualified electricians. Apprentice Daniel Young said: “EIC has taught me how to work as part of a team that can bring a major project together. Working on the NIA has made me feel that I am giving something back to Birmingham.”

Steve, Andrew, Pete, Daniel and Luke all finish their EIC apprenticeships at different times but will be working on the NIA redevelopment project for its duration through to relaunch in January 2015. They all have different ambitions of what they want to do when they finish their apprenticeships, from site and project management, through to qualified electricians.

All agree the EIC apprenticeships offer great career prospects for the region, whether it’s for students considering their career options at secondary school or further education level or those already working in the construction industry who want to try a new career path.

Apprentice Peter Madden commented: “I am working close to my home, learning about health and safety and I now have the opportunity to complete my AM2 and forge the start of a career in the construction industry.”

John Harris, MD of EIC, added: “The development of local talent is a key element in EIC’s sustainable strategy and it is so encouraging to see young people contributing in such a positive way to an iconic project.”

About the NIA redevelopment

The NIA, one of the busiest, large-scale indoor arenas in Europe, is undergoing an extensive £26m redevelopment throughout 2014 which will see the venue completely transformed culminating in a relaunch in January 2015. The modernisation of the NIA takes advantage of its location on the city’s canal side with a new waterside front of house atrium with spacious circulation areas and a glass fronted façade; an additional 5,926sq.m of pre/post show space within the NIA; iconic Sky Needles on top of the NIA which will light up the skyline of Birmingham at night; new dining and seven-days-a-week retail offers; enhanced seating in the 12,700 (seated) capacity arena and improved changing and training facilities.

In the week ending Feb 24, Amazon UK announced plans to create more than 5,000 full-time jobs this year, taking the company’s total UK workforce to over...

Paying the Price for Under Investing

Peace Recruitment, an Edinburgh based recruitment consultancy focused on the construction, property and engineering sectors, has warned employers that skilled...