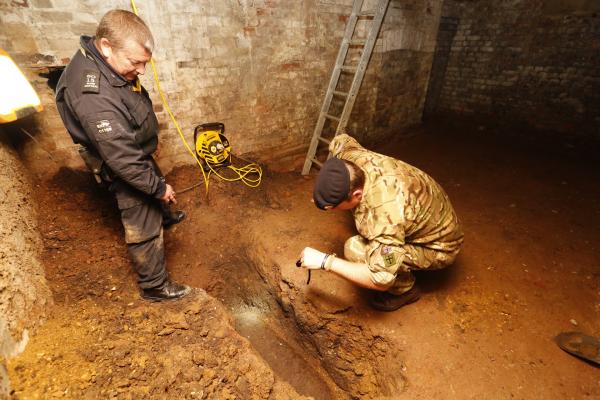 They worked through the night to stabilise the bomb, which is believed to have been dropped over London during German bombing raids in the early 1940s but did not detonate. The bomb had lain undisturbed deep in the ground for 70 years. It has now been de-activated and removed.

The Army Explosive Ordinance Disposal Commander from 11 EOD Royal Logistic Corps in charge of the operation said on Monday: "I can confirm that the device is a German WW2 air delivered bomb weighing 250kg which if detonated could cause mass destruction. The bomb has been in the ground for more than 70 years but unlike a fine wine does not improve with age. It is potentially more dangerous today than the day it was made.

"The bomb is located in the cellar of a three storey building which has severely restricted access. During the night we have positively identified it dug round it so we can then neutralise the fuse using a complex but tried and tested chemical process called immunisation.

"Once that process is complete we will be in a better position to remove the bomb from London in conjunction with our colleagues from London Fire Brigade, the Met Police, and Tower Hamlets Borough Council.

"The military EOD teams have extensive experience with these situations, having operated in Iraq, Afghanistan and Northern Ireland.

"Earlier this year they detonated similar devices discovered in Wembley and Bermondsey."

Yesterday, the Metropolitan Police confirmed the device was discovered by building contractors; it has now been removed; all road closures and cordons have been lifted; local residents have been allowed back into their homes.

One resident, who along with others was evacuated to a local school, Tweeted that the experience had resurrected the East End Blitz spirit of the 1940s.