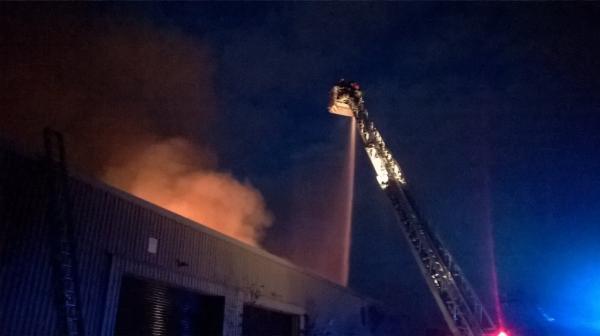 Fifteen fire engines and around 100 firefighters and officers were called to a large fire at Parkfield industrial estate on Culvert Place in Battersea, London on Wednesday 13 evening.

The fire badly damaged a range of eight single storey industrial units. At the height of the blaze smoke could be seen for miles around and local residents were being advised to keep their doors and windows closed as a precaution.

The Brigade's 999 control officers took over 100 emergency calls from members of the public to the incident and train lines in the area were also affected for a time.

Crews were still at the scene on Thursday 14 morning and remained there to damp down the fire. Train services between Clapham Junction and Victoria had resumed.

Station Manager David Farr who attended the incident said: "This was a large, challenging fire and crews worked extremely hard to get it under control. A lot of deep seated hot spots still remained and although we made steady progress extinguishing those, crew remained at the scene well into Thursday morning."

The Brigade was called at 8:51pm on Wednesday evening and the fire was under control by 3:30am on Thursday morning. Crews from Lambeth, Brixton, Tooting, Clapham, Chelsea, Peckham and other surrounding fire stations are at the scene. The cause of the fire is under investigation.

Picture: Fifteen fire engines and around 100 firefighters were called to a large fire in Battersea