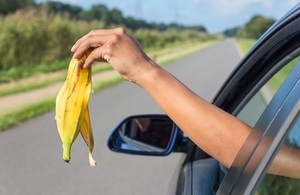 New steps will be taken to deal with litter louts and those few who mindlessly throw rubbish from their vehicles, Environment Minister Thérèse Coffey has said.

Cleaning up our streets and countryside currently costs the taxpayer almost £800 million a year and so maximum on-the-spot fines for dropping litter will almost double from April - from the current limit of £80 to £150 - in order to deter and punish the anti-social minority who continue to drop rubbish.

In future councils will also be able to impose these fines on the owners of vehicles from which litter is thrown, even if it was discarded by someone else. The government is clear these fines should not be abused simply as a means of raising money, so guidance on how fines should be applied will be issued to councils.

Coffey said: "Littering blights our communities, spoils our countryside and taxpayers’ money is wasted cleaning it up. Throwing rubbish from a vehicle is just as unacceptable as dropping it in the street and we will tackle this antisocial behaviour by hitting litter louts in the pocket. These new fines will make sure the perpetrators, not the local community, bear the cost of keeping our streets and roads clean."

For the first time, local authorities will also be able to apply these penalties for littering to vehicle owners if it can be proved litter was thrown from their car – even if it was discarded by somebody else.

The changes to fines for littering follow a public consultation as part of the launch of England’s first ever Litter Strategy in April 2017. These new findings showed the vast majority of respondents were in favour of increasing on-the-spot fines.

More than 85% were in favour of increasing fixed penalties for littering, while local authorities agreed that new penalties to tackle littering from cars would help to improve environmental quality in their area. The government is today confirming that it will proceed with these measures, with legislation introduced by the end of this year and the new fines in place by April next year, subject to parliamentary approval.

The government is clear however that councils must not abuse the power to impose fines. Councils should take into account local circumstances, like local ability to pay, when setting the level for these fines. Government guidance will be issued around the turn of the year to ensure the new powers are used in a fair and proportionate way by local authorities.

Picture: Littering motorists face the banana skin of heavier fines if they are caught littering from their vehicles