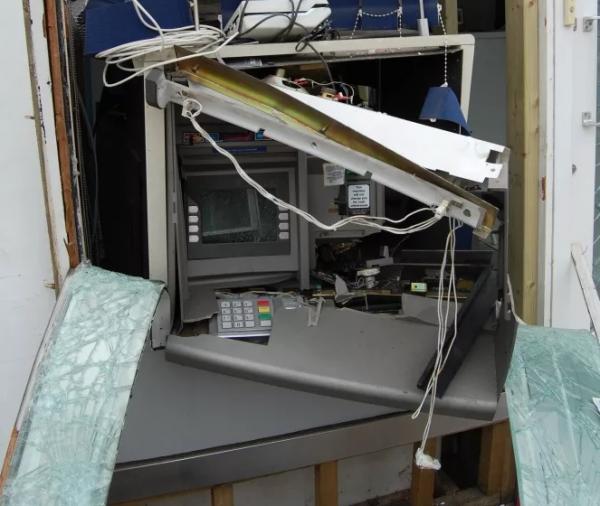 The explosions not only caused huge damage to the buildings where the 'hole in the walls' were sited, they also posed a massive risk to public safety.

Jamie Duggan, Anthony Rodwell were sentenced to 12 years each for conspiracy to commit burglary with intent to steal and conspiracy to cause explosions likely to endanger life or cause serious injury to property. Trevor Collins got nine years.

All three men are only in their mid-twenties. The audacious series of offences, investigated by the Met’s Flying Squad, took place between July 2014 and April 2015, primarily in banks and post offices in west London, Surrey and the Thames Valley.

The incidents involved a method of entry that was highly dangerous, not only for those committing the offence but particularly for members of the public either living in properties attached to the venues or passing by, unaware that an explosion was about to take place.

To gain entry to the ATMs, the gang pumped a combustible oxyacetylene gas into the cash machine and then ignited it from around 15 metres away with an electrical charge.

Detective Inspector Scott Hartley, of the Flying Squad, said: "Given that this series of crimes involved 27 offences, it is fortunate that no unsuspecting members of the public were injured. In one case, the front fascia of the ATM and other debris was blown 30 to 40 metres from the scene. If this debris had struck a member of the public or a passing car, the resulting injuries could easily have been fatal."

After exploding the cash machine, the gang would then have to break into the venue in order to access the back of the machine where they would attempt to remove cash from inside.

During the ten month crime spree, 19 attempts made by the gang failed. In the majority of failures they exploded the ATM but were unable to access the safe to access the cash. In three cases they were either disturbed or confronted by members of the public and fled the scene leaving their equipment behind.

The remaining eight offences resulted in a total cash loss of approximately £356,330 with damage caused to the venues as a result of the explosions totalling £320,055.

The gang was found to have robbed more than one venue on the same night. On 6 October 2014, three venues were targeted in little more than an hour.

In all cases the vehicles involved displayed stolen or cloned number plates.

Flying Squad officers were able to identify Duggan as a suspect after his DNA was found on the inside of the safe door of the ATM robbed in Greenford Road on 18 November 2014 [offence 19]. This incident was one of the gang’s unsuccessful attempts to access the cash inside the machine - they made off with just £30. Having identified Duggan, detectives were able to quickly identify his two associates as Rodwell and Collins.

Picture: Below is an interactive map of the explosion sites and a video showing just how dangerous the actions could have been to passers-by. Main picture is of damage at an incident in Hillingdon