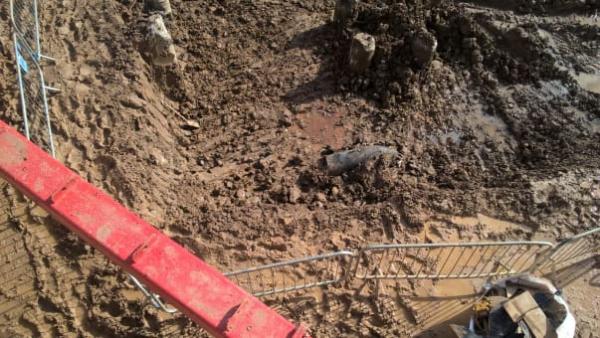 The operation to remove an unexploded World War Two bomb from a building site in London's Brondesbury Park, went on until 8:30pm on Friday night March 3.

The Fire Brigade, police and the army were all involved after the device was discovered on Thursday morning.

Specialist officers from the army worked throughout the day and night and into Friday to make the device safe. At 7:30pm on Friday, it was loaded onto a lorry and an hour later, the lorry was driven away.

Officers from all services were called at about 11:30am on Thursday 2 to a building site. Nearby residences, businesses, two schools and buildings were evacuated as a precaution.

Specialist officers from the Army were called to assess the device. Such were their concerns that road closures in the area.

A reception area in Mortimer Road was opened by the London Borough of Brent to assist those residents affected. Superintendent Nigel Quantrell of Brent Borough, said: "I can assure you that we are working very hard resolve the situation."

Fire Brigade Officer Jerome Kumedzina said: "Police have put safety cordons in place and there are local road closures so motorists are advised to avoid the area if possible. A school, nursery and nearby homes have been evacuated as a precaution and the local authority has set up a reception centre to assist those people affected."

Picture: Another suspected unexploded WW2 bomb has been found on a building site in London - with thanks to the London Fire Brigade