Can See the Forest for the Trees 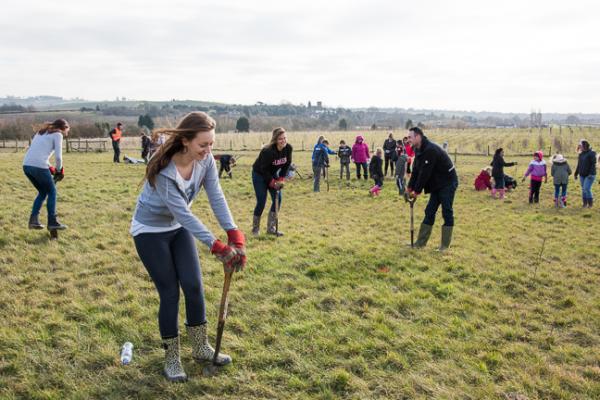 The National Forest is taking root in the heart of England across parts of Derbyshire, Leicestershire and Staffordshire. It is transforming the landscape with the aim of linking the two ancient Forests of Charnwood on its Eastern fringe with Needwood Forest to its West.

PHS Direct, PHS Group’s specialist workplace supplies division, has made this the fifth year of sponsoring the National Forest. This time, it is working alongside Eureka Primary School in Hartshorne Wood to plant a mixture of oak, sweet cherry and field maple, adding to the 22,000 trees already funded by the workplace consumables provider.

This initiative is not only seen as environmentally friendly and an opportunity for PHS staff to improve their local surroundings but also educational as the scheme forms part of the local school’s environmental lesson plan. Rather than learning from the classroom, children can escape to the great outdoors and learn about the forest by getting their hands dirty with some tree planting.

“This is a really important scheme that will give back for years to come and demonstrates our ethical standpoint to customers, suppliers and our staff,” explained James Clark, MD, PHS Direct. “The trees planted by us today won’t be harvested until 2045 and this shows our sponsorship of the National Forest isn’t just providing short term commercial advantages.”

Picture:    The National Forest is benefiting from a partnership between Eureka Primary School and PHS Direct.

Cooking-up a Change and Beefing-up on Renewables

The owner of brands, such as Beefeater, Brewers Fayre and Table Table, has started powering its entire UK operations with 100% renewable energy. Since April 1,...