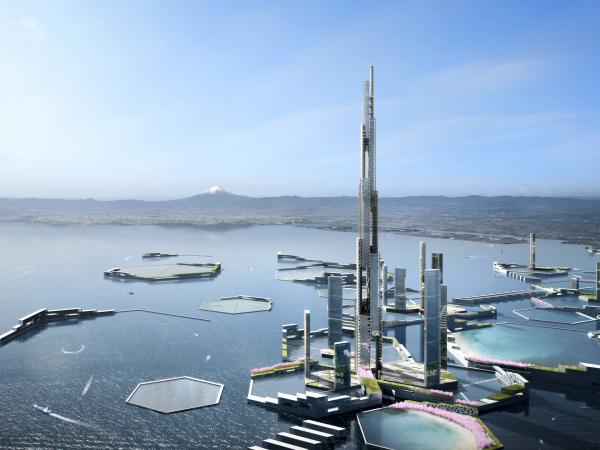 The problem that rising sea levels pose has been exacerbated by the growth of urban centres for the world’s population. This was made clear by a World Health Organisation report that showed that while only 34% of people lived in cities in 1960, this had leapt to 54% in 2014.

While Japan more recently has been a victim of a massively damaging earthquake and tsunami in 2011, minds have been focusing on the creeping danger of sea levels as well. It has led to a project being launched called Next Tokyo where a new ‘mega-city’ will be built in Tokyo bay capable of dealing with the natural threats of earthquakes, typhoons and rising sea levels.

If it goes ahead the bay will be transformed by 2045 with ambitious structures that would include a mile-high skyscraper which could accommodate 55,000 people and sky ‘lobbies’ with shopping centres, restaurants, hotels, gyms, libraries, and health clinics. Sky Mile Tower would stand at 5,577ft, double the height of the world’s present tallest building, the Burj Khalifa in Dubai.

The buildings and structures would tend to be hexagonal to cope with any extreme weather conditions and with imaginative storage and pumping facilities, especially for the huge skyscraper.

Two architectural companies have joined forces for the Next Tokyo project – Kohn Pedersen Fox Associates and Leslie E. Robertson Associates. Funding for this immense concept would come from the value of the new waterside properties around the bay – though this may be challenged by environmentalists as well as by any setbacks that Japan may face in its economic performance in the future.

Picture: If plans go ahead by 2045 the Next Tokyo project will see the bay looking like this with buildings and structures purpose built to withstand all that nature can throw at them