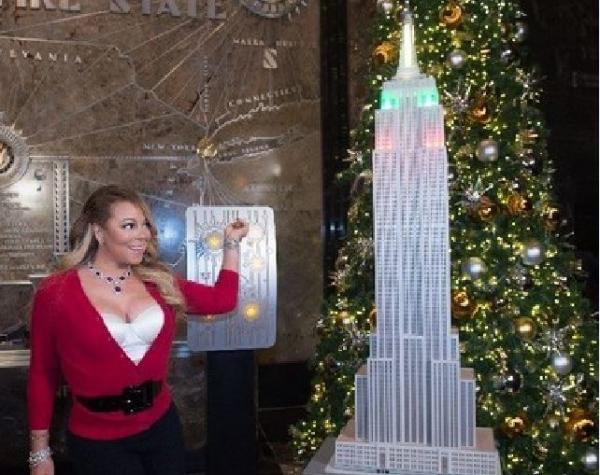 The Empire State Realty Trust and iHeartMedia have tested their new holiday music to light show featuring Mariah Carey but have turned it off again until a dignified December 19. The Empire State Building's lights are syncronised to All I Want for Christmas Is You.

This is Mariah Carey's version of the tune from her first holiday album, Merry Christmas. The show, designed by renowned lighting designer Marc Brickman, will premiere on December 19 and will be synced live each night at 7:00pm ET on iHeartMedia New York's light music radio channel until December 25.

Carey was on hand to flip the switch at a lighting ceremony in the Empire State Building's ESB) famed Fifth Avenue lobby. The event is a part of a month-long celebration which features stunning holiday decorations in the building's windows and Art Deco lobby, appearances by surprise guests and a pianist playing a selection of holiday favourites.

"I can see the Empire State Building from my apartment, and it is one of my favorite buildings in the world," said Carey. "To have its lights synched to my song is the perfect gift."

About the Empire State Building

Reaching 1,454 feet above Midtown Manhattan (from base to antenna), the Empire State Building is owned by the Empire State Realty Trust, Inc. With new investments in energy efficiency, infrastructure, public areas and amenities, the property has attracted first-rate tenants in a diverse array of industries from around the world. The skyscraper's robust broadcasting technology supports all major television and FM radio stations in the New York metropolitan market.

Picture: Mariah Carey's was on hand to turn on (and turn off until December 19) the Christmas lights and tunes at the Empire State Building