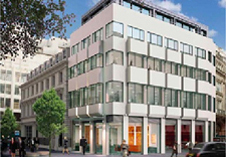 The CEO and Finance Director, the Commercial, Planning & Development and Marketing and Communications teams will all be based there. Staff will be vacating the firm's current commercial headquarters in Berger House, Berkeley Square at the end 2013.

Granger said: "This is a bold move for the firm. We are confident that this new location will reinforce our national focus and ultimately expose our company profile to both London and National markets."