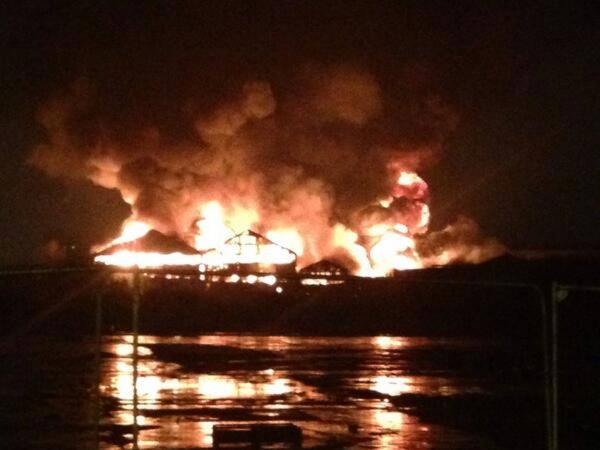 Firefighters from West Yorkshire Fire and Rescue Service (WYFRS) are still working alongside demolition crews today to tackle a blaze at an Armley industrial site.

The major blaze broke out at Armley Road, Leeds, shortly before 2:00a.m. yesterday (Easter Monday) and had an initial response of 15 fire engines and 100 firefighters.

The fire, which involved two business premises, TradPak Recycling and Hazel Products, was brought under control by midday yesterday.

Today three fire engines, an aerial appliance and 20 firefighters remain at the scene. Group Manager Martin Langan for WYFRS said: “There are several seats of fire underneath sections of the roof of Hazel Products that have collapsed. We are working with demolition crews to gain access and then we will advance with handheld firefighting jets to deal with the remaining seats of fire.”

It is anticipated that firefighters will be at the scene all of today and possibly tomorrow.

Armley Road is partially closed and will be for the majority of today. Police are also in attendance to manage traffic flow.

GM Langan added: “This is the largest fire the service has dealt with this year but it has been handled well. We are really pleased that we have managed to prevent the fire spreading any further than the origin and most of the businesses in the area are back to normal and open.”

However, the fire has caused considerable damage to Hazel Products and an assessment will be made at a later date whether a full demolition is necessary.

The cause of the blaze remains under investigation.

Although the smoke is not believed to be toxic, nearby residents have been advised to keep their doors and windows closed as a precaution.

At the height of the fire just after 2:30a.m. on Monday, local and national press reported witnesses describing scenes that were ‘like Armageddon’ with explosions as fire jets burst into the sky as loud booms and fireballs were sent up into the sky. One nightclub reveller, evacuated to safety, posted the above picture under the heading ‘Leeds is on Fire’.