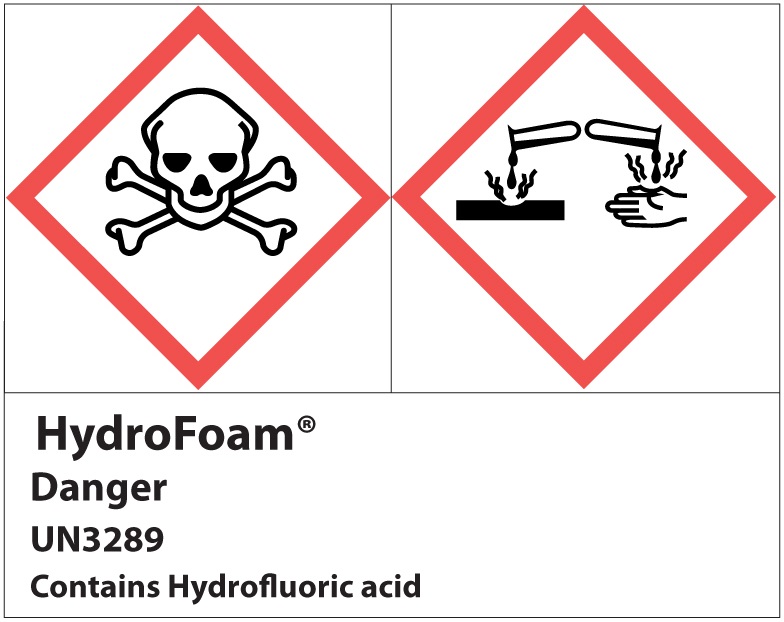 If you were paying attention towards the end of last June, you might have noticed a change to safety instructions on the HVAC chemicals you use every day. Advanced Engineering Technical Director Colin Pratt explains how this could change the way you use, store and transport them in future.

Every hazardous chemical product you use has a safety data sheet (SDS), which sets out any precautions you should take to use, store and transport it safely. Recently, this information changed – and many HVAC engineers didn’t notice.

If that’s you, you’re not alone; safety instructions aren’t something we tend to check every day. Not many of us can honestly say we’ve checked the back label on the household bleach we use at home – much less read the safety data sheet. After all, our parents taught us how to use it safely. Or at least we think they did.

In fact, if we did read the label, we may see pictograms for “flammable” and “corrosive”, a warning that it “Causes severe skin burns and eye damage” and advice to wear protective clothing, gloves, and eye and face protection.

Maybe we should take things a little more seriously – especially at work, where HVAC chemicals can be even more powerful, and we have a legal duty to safeguard ourselves and others.

Since the end of last June, the majority of countries now use the same set of pictograms and classifications for every chemical: the United Nations’ Global Harmonised System (GHS).

The new, global system should make it easier to use chemicals safely – regardless of location and language. And the classification is based on established hazard data from the scientific community, rather than potential risks.

But it’s down to the individual to decide what precautions are most appropriate for you to take. And importantly, those statements are based on the way the product will likely be used. For example, “Keep out of the reach of children” is an important warning for household bleach. If the same statement doesn’t appear on your bottle of chemical coil cleaner, that’s because children shouldn’t be near work equipment anyway – not because it’s safe to play with.

Safety is one thing; marketing is another

If a chemical requires a safety classification, it should be visible on the product label for you to see – but you need to look for it. Many manufacturers market products as “Environmentally friendly” or “Safe to use”, while the pictograms on the back tell a very different story: “Corrosive, “Toxic” or “Dangerous to aquatic life”.

It sounds obvious, but the way you use, transport, store and dispose of your chemicals should always be based on the safety classification, not the marketing slogan – especially in HVAC, where many of the chemicals are considerably stronger. Again, the standard pictogram system should make this easier.

The risks posed by transporting chemicals are quite different to how they’re used – so they’re governed separately, by a system of UN numbers and ADR (Accord Dangereux Routier) rules.

It’s essential to follow these rules closely, as the consequences for not doing so can be fatal – and not only for the driver. If chemicals are spilled in an accident, emergency services need to know how to deal with the associated risks, or they could put themselves – or the public – in harm’s way.

This is where the UN number is so valuable. It’s a four-digit number that’s set globally to make dangerous and hazardous products immediately identifiable. On vehicles with a single hazardous load, you’ll find it on the orange, rectangular plate at the front and back of the transport unit – below the Emergency Action Code that tells responders how to react.

Because different chemicals are transported in different ways, there are several derogations from the ADR rules. For example, some chemicals are dangerous in large quantities, but safe to transport in small containers that remain within the vehicle, as a small leak that’s easily contained will only cause a limited problem.

But where full ADR applies, you’ll need additional paperwork, and specially modified vehicles. The driver needs special training and certification, a clear idea about exactly what chemicals are on board, and written instructions about what to do if there’s a leak.

It’s also important to segregate the load correctly – so chemicals which could react violently are never transported next to each other.

We’re working to keep you safer

At Advanced Engineering, we’re well known for looking for new formulations to make our products even more effective. But you might not realise we’re also researching ways to reduce potential risks.

Our in-house Chartered Chemist, Dr Kajally Jobe, seeks out ways that we can make our chemical products safer for engineers to use, without reducing their effective power.

For example, another hazard label change you might not have noticed is on our own HydroFoam coil cleaner and brightener. It’s long been an industry staple for shifting stubborn, baked-on dirt – precisely because its harsh chemical formula could be relied upon to get the job done. But that also meant it was hazardous to transport and use.

The new formulation, HydroFoam 2.0, does exactly the same job, every bit as well. But if you look closely you’ll see it’s now non-toxic and safe to transport – plus it’s biodegradable and protects aluminium and copper.

Looking closely at the label is important for the future of your business – and ours too. Where making chemical formulations safe, non-toxic and sustainable was once a goal, it’s now our starting point.