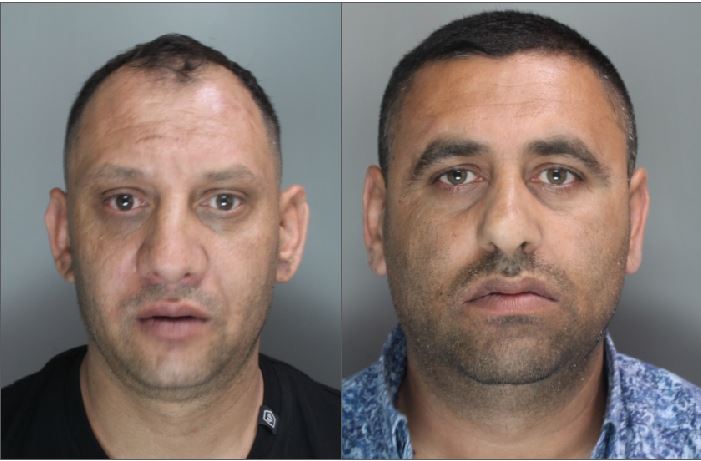 Distraction thieves operating in the City of London have been jailed and offences halved while an organised crime gang responsible for supplying cocaine to City workers has been busted.

The City of London Police’s crackdown on distraction thefts has seen offences reduced from 72 in April to 32 in June.

Two men have just been sentenced. Valter Stanescu, 37, from Barking and Nicosur German, also 37, of no fixed abode, were sentenced on Friday July 19 at Inner London Crown Court to 13 months imprisonment each after pleading guilty to one count of conspiring to steal mobile phones, wallets and bank cards.

The men used leaflets to approach victims in pubs, offices and fast food restaurants. They used these leaflets to cover their victim’s personal belongings and distract them from the theft taking place.

During a three hour period on 23 May 2019, the two men stole mobile phones, bank cards and a wallet from different victims. The total of the stolen items was just over £3,000. Following the arrest of the pair, officers searched their car and found five additional phones hidden inside the fabric of the rear passenger seat.

Earlier this year, CCTV footage was released to show how these criminals typically carry out the theft. They initially distract the victim by asking them for directions or begging for money and placing a written note or leaflet on their table, before lifting items such as mobile phones and wallets.

In response to the spike in thefts, the City of London Police deployed specific tactics to target these criminals, including deployment of plain clothes officers and frequent patrols at known hotspots.

Community officers have also been engaging with local businesses and customers within the Square Mile to inform them about distraction thefts.

The City of London Police have also disrupted a large scale organised crime gang responsible for taking orders of cocaine from City workers and delivering the drugs in the Square Mile and central London.

An eight-month long investigation has not only resulted in eight ‘couriers’ of the drugs being sentenced to jail but also two ‘controllers’, who would take the orders of cocaine and arrange for their pick-up. Two other individuals involved with the group were found guilty of non-drug related offences.

Overall, the gang of 12 have been sentenced to over 30 years in prison. Individually the sentences are as follows:

Halil Shehu, 22, was sentenced to 32 months imprisonment for possession with intent to supply.

Albi Hoxha, 23, of no fixed abode was sentenced to 34 months imprisonment for possession with intent to supply cocaine.

Bledar Xhani, 23, was sentenced to 36 months imprisonment for possession with intent to supply cocaine, eight months for dangerous driving and four months for possession of identity documents with improper intention.

Dritan Jella, 33, was sentenced to four months imprisonment for possession of fraudulent identification documents with intent.

Kladji Qyra, 22, was sentenced to 25 months imprisonment for conspiracy to supply cocaine.

Bledar Ponari, 28, was sentenced to 64 months imprisonment for conspiracy to supply cocaine and six months for possession of improperly obtained identity documents.

Emirjan Demiraj, 22, was sentenced to 34 months imprisonment for conspiracy to supply cocaine.

Fjoralb Fera, 21, was sentenced to 60 months imprisonment for conspiracy to supply cocaine and for possession of criminal property.

Erdi Nezaj, 25, of no fixed abode was also arrested but immediately deported by the immigration services.

In total, 1.2kg of drugs with a street value of up to £144,000 were seized, along with over £20,000 in cash. Two mobile phones also seized during the operation were found to be extremely active ‘drug line’ phones, belonging to the two ‘controllers’.

Detective Constable Lee Johnson, who led the operation for the City of London Police, said: “A lot of individuals delivering drugs across the capital are young and vulnerable people who are being exploited. Many people don’t realise it but money from selling drugs can be used to fund other serious offences.

“The arrest and sentencing of these individuals sends a strong message both to people coming to the City to sell drugs and those in the City buying them: this will not be tolerated by police.”

A man who was rescued from the River Thames on the night of July 31 has been called ‘monumentally lucky’ by the firefighters who saved his life.

It is believed that the man was coming home from a night out when he decided to enter the water in Kingston. He was fully clothed but had placed personal possessions including his mobile phone on the side. When he realised he couldn’t get out of the water he fortunately was able to reach his phone and call 999.

Mobile cell technology pinpointed the man’s location within a 50 metre radius and crews were quickly mobilised to Queens Promenade.

The location was very close to where a man had died a week earlier. The same crews from Surbiton and Kingston fire stations who had searched for the victim were the firefighters mobilised to this emergency.

Kingston Watch Manager Ben Midgley said: “When crews arrived they found a man waist deep in water and unable to pull himself out. We pitched a ladder at into the bank and helped the man to safety. He was starting to suffer from the effects of hypothermia so any longer in the water and this could have had tragic consequences. We sadly attended the tragic drowning of the man last week so it was really good that this had a much better conclusion.

“He was monumentally lucky and it shows the dangers of entering the water after a night out. Don’t drink and swim.”

Had members of the public spotted the man in the water they would have been unable to throw in a nearby life ring as it had been set on fire just hours before.

The City of London Police is reminding the public of how they can protect themselves from theft. No matter where you are in the City:

Please feel free to copy any of this article and distribute it to staff in your workplace.

New research from Direct Line for Business has revealed workers took 4.3 million sick days between 2014 and 2017, with 568,000 being the result of an accident in the...

A mother and her two daughters, who plotted to use knifes to carry out a Borough Market styled terrorist attack in London have been jailed. Rizlaine Boular, 22 of...