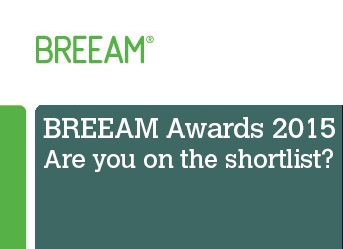 BREEAM has reported that the 2015 awards have seen a record number of ‘strong’ contenders coming from a wider variety of organisations than ever before.

Shortlisted organisations include Bouygues Construction, Argent, Western Power Distribution and John Lewis, highlighting the quality of build in every corner of the industry.

BREEAM is the an environmental assessment method and rating system for buildings, with 250,000 buildings with certified BREEAM assessment ratings and over 1 million registered for assessment since it was first launched in 1990.

Gavin Dunn Director BREEAM said: “I am delighted to announce the shortlist for the BREEAM Awards 2015. Being shortlisted is a special achievement – all the clients, BREEAM assessors, design teams and others in this shortlist have excelled in innovation and best practice.”

The winners will be announced on Tuesday, 3 March 2015 at the London Marriott, Grosvenor Square, London.

BREEAM has stated that sponsorship opportunities are still available.

No Time to Waste for Awards

The 2015 recycling 'Oscars' for Excellence in Recycling and Waste Management are open for a deadline of next March   Celebrating the creativity,...