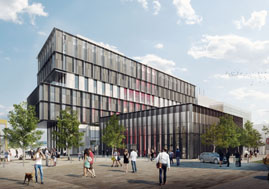 Construction companies, contractors and suppliers interested in working on Cardiff University’s £300 million Innovation Campus are being invited to ‘meet the bidders.’

Chris Strong, Portfolio Director, Cardiff Innovation Campus, said: “Our ‘Meet the Bidders’ event is designed to give companies early access to the bidders for the construction and fit-out contract, which we expect to announce at the end of December 2017.

“Inviting expressions of interest from supply chain providers now will help ease the start of the build in 2018. We are interested in talking to a range of contractors and suppliers, from heavy plant operators through to companies providing office fixtures and fittings.”

Cardiff Innovation Campus is at the heart of the University’s vision for economic prosperity in Wales. Two new buildings on the Maindy Road site will house four academic centres of excellence. The Institute for Compound Semiconductors and Cardiff Catalysis Institute are already pioneering scientific research. The Innovation Centre will nurture partnerships between entrepreneurs, business leaders, professional advisers, academics and students, and the Social Science Research Park will help solve societal problems through collaborative research.