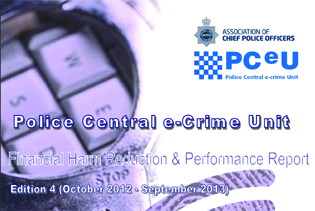 Figures announced by the Metropolitan Police Service's (MPS) Police Central e-Crime Unit (PCeU) claim that £1.01 billion in the last two and a half years has been prevented from being lost through the impact of cyber crime and has been achieved following a number of successful operations led by the PCeU.

The PCeU’s fourth and final Financial Harm Reduction & Performance Report shows that in those two and a half years the unit has also:

secured the conviction of 89 cyber criminals, with a further 30 people awaiting trial

secured a total of 184 years imprisonment for 61 criminals given custodial sentences - an average of three years in jail per offender.

The report comes as a criminal gang, which included a teenage boy, were arreted last week for ‘cyber bank robbery’.

The PCeU’s activity since April 2011 includes Operation Allandale, which saw the arrest of three men behind a conspiracy to defraud banks worldwide using a sophisticated phishing scam - preventing loss of around £74 million to the UK alone.

Operation Caldelana, in 2012, saw officers prevent £39 million of harm to the UK when they arrested an organised crime group who had siphoned off money from a bank customer’s account, having obtained her details through a sophisticated phishing scam. The gang had details for a further 11,000 potential victims.

Detective Superintendent Terry Wilson, from the PCeU, told ThisWeekinFM: "Developing a national policing response to this new and evolving criminal methodology has been extremely challenging, however, the PCeU has enjoyed outstanding success during its time as the national lead on combating cyber crime in the UK.

“The creation of three regional hubs across the UK has strengthened the national response to cyber crime. We have worked closely with partners from across the globe to reduce the financial harm to thousands of UK citizens and businesses, as well as securing the convictions many cyber criminals who have targeted the UK.

"Harm is not always financial - immeasurable levels of emotional and reputational harm is also suffered by those who have their personal details hacked and published. In some cases, the release of personal information has potentially put lives at risk, so our achievements have also been significant in ensuring public safety."

The recent Carphone Warehouse hack this month highlights the essential need of securing of sensitive data to avoid devastating effects such losses can mean to a...

Software Giant Faces Up to a Creative Suite of Cyber Crime

According to the BBC, last night (3 October), software company Adobe was reporting that as many as 2.9 million customers could have had their information stolen during a...