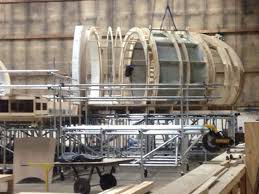 The Health and Safety Executive has today (Thurs 11) informed Foodles Production (UK) Ltd that it will be prosecuted over an incident in which actor Harrison Ford was seriously injured during the filming of Star Wars: The Forces Awakens.

Foodles, based in Queen Caroline Street, London, will appear at High Wycombe Magistrates Court on 12 May 2016 to face four charges.

Ford suffered a broken leg and other injuries when he was struck by a heavy hydraulic metal door on the set of the Millennium Falcon. The incident happened on 12 June 2014 at Pinewood Studios.

A spokesman for the HSE said: “HSE has today informed Foodles Production that it will be prosecuted over four alleged breaches of health and safety law. The charges relate to an incident during filming of Star Wars Episode VII: The Force Awakens, which left Harrison Ford with serious injuries after he was hit by a heavy hydraulic door.

“By law, employers must take reasonable steps to protect workers – this is as true on a film set as a factory floor. We have investigated thoroughly and believe that we have sufficient evidence to bring the case to court.”

A source at the studio told ThisWeekinFM: It was quite shocking - Ford is not a young man anymore (he must be fit though) - but he has to take some blame. He stepped through the doors of the Millennium Falcon but missed his cue to move forwards so he got stuck in the doors. The hydraulic doors closed with one hell of a whack. We thought they'd killed him."

Picture: From the giant set at Pinewood where Harrison ford was seriously injured whilst filming Star Wars - The Force awakens

Tesco has been fined after health and safety breaches led to a worker falling through a skylight. The employee of Tesco Maintenance Ltd was lucky to suffer only minor...

G4S Cash Solutions (UK) Limited has been fined £1.8 million after Harlow Council successfully prosecuted the company for failing to protect its workers from the...