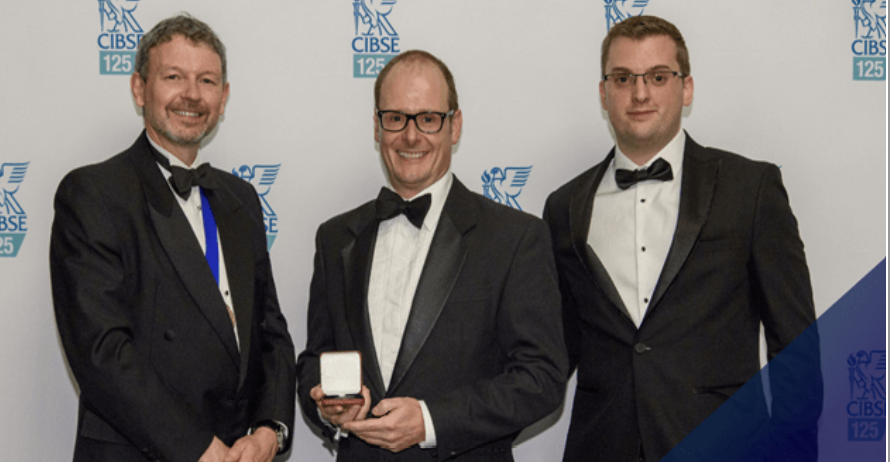 David serves on the CIBSE Board as VICE Chair and Secretary of the FM Group as well as being a leading author for CIBSE Guide M.

This award represents exceptional service to CIBSE and the wider built environment industry and is CIBSE’s second-highest honour.

The dinner, held at the Institute of Directors on 14 October 2022, also celebrated CIBSE’s 125th anniversary.

“I would call on all employers to include professional volunteering as part of staff objectives, as it's only by volunteering that we can grow and develop as an institution, a sector and as society.”

In a citation read by the new Head of CIBSE Certification Sebastian Gray, David was praised for his dedication to several CIBSE projects including the Emerging from Lockdown Series, a set of documents to assist business owners with ventilation, air cleaning technologies and safe lift use. David was previously awarded a presidential commendation for his work on this series.

Sebastian also noted David’s commitments beyond CIBSE, highlighting his role as a lead judge for IWFM, the Building Controls Industry Association and Green Sky Thinking Week. David’s commitment to promoting engineering to the younger generation was also celebrated, including his work in secondary schools and guest lecturing at UCL.

Sebastian said: “Like those David has supported and many others that know him, I look at David as a mentor and exemplar of what a professional building services engineer should be. I’m even prouder to call him a friend and in my view, he is deserving of the CIBSE Silver Medal for his years of continued dedication to CIBSE and the industry.”

Commenting on the award, David said: “I thoroughly enjoy volunteering for my institutions and my profession - volunteering is its lifeblood. It enables us to grow as individuals, to develop our personal networks and provide a valuable contribution back to those in the early days of their career. It also provides thanks and respect to those who helped support and mentor us in the formative stages of our career.

“I would call on all employers to include professional volunteering as part of staff objectives, as it's only by volunteering that we can grow and develop as an institution, a sector and as society.”

ThisWeekinFM recently spoke to David at ThisWeekinFM's Facilities and Workplace Networking Club about his career highlights and personal aims, what the CIBSE FM chairship means to him and his passion for diversity and inclusion within the industry.