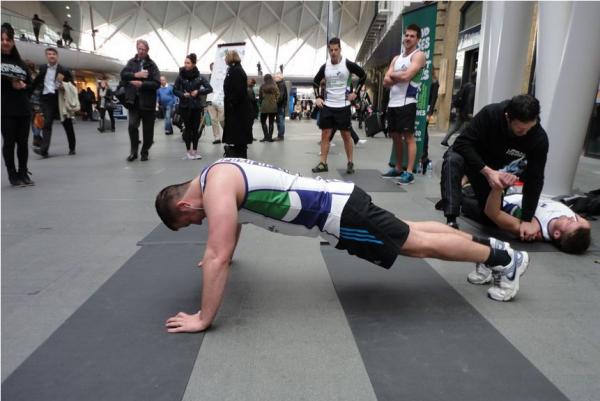 Employees from Incentive Lynx Security completed a gruelling 10,000 press-up charity challenge at King’s Cross Station on Friday. The team of six security personnel smashed their four-hour target by completing the challenge in just 3 hours and 10 minutes, raising more than £2500 for Macmillan Cancer Support.

King’s Cross station was the logical choice to stage the event as Incentive Lynx, part of the Incentive FM Group, provides building and estate security services at King’s Cross Central, one of London’s most successful development projects which is managed by Broadgate Estates.

During the challenge gathering crowds cheered on the team, which was led by Shaun Wall, Contract Manager at Incentive Lynx. Supporters had the opportunity to win gym memberships from fitness centres across London in a prize draw whilst a Macmillan team took donations from the public.

Shaun, who came up with the idea and drove it forward, gained a stone in muscle during a vigorous two-month training programme, said: “We are absolutely delighted to complete the challenge and break our four-hour target. I would like to thank everybody who supported the team on the day, the encouragement we received inspired us to keep going – even when the pain kicked-in!

We were only 2000 in and I could see the worry and panic on the teams faces as we realised what a mountain we had to climb to complete this challenge, but the team dug deep and pushed themselves all the way to the end. I would like to take this opportunity to thank UrbanKings gym of Kings Cross, who were able to be there on the day and support the team, including supplying two sports therapists that massaged and stretched the team all the way to the finish.”

There is still time to submit a donation by visiting the team’s Just Giving Page at: www.justgiving.com/PressupChallenge.

Original article - Employees from Incentive Lynx Security will be putting their strength to the test by taking part in a 10,000 press-up challenge for charity.

A team of six security personnel, led by Contract Manager Shaun Wall, will look to complete the challenge in less than four hours at King’s Cross station on Friday 28 March to raise money for Macmillan Cancer Support.

The challenge kicks off at 10:30am and the team is encouraging people to come along and cheer them on. On the day supporters will also have the chance to win a number of gym memberships that have been donated by fitness clubs across London.

Shaun, who thought-up and organised the challenge, has been training every other day for two months in order to prepare himself for the event. During that time he has gained a stone in weight through muscle gain.

He said: “We wanted to organise a fundraising event with a difference - it’s not every day you see a team of men completing 10,000 press-ups in a busy London train station! To make the challenge even harder only one team member will be able to complete press-ups at any one time.

“Everybody knows someone, whether a family member or friend, who has been affected by cancer. Macmillan Cancer Support is a wonderful charity and we want to raise as much money as possible for this worthwhile cause. We are hoping people can dig deep and give us more incentive to complete this monstrous task.”

If you would like to support the challenge and donate, visit the team’s Just Giving page at: www.justgiving.com/PressupChallenge. People will also have the opportunity to donate at King’s Cross station on the day.

The IFMA Foundation has launched a preview chapter of “Work on the Move 3: Building Better Workplaces After the Pandemic”, a follow-up book on integrated...