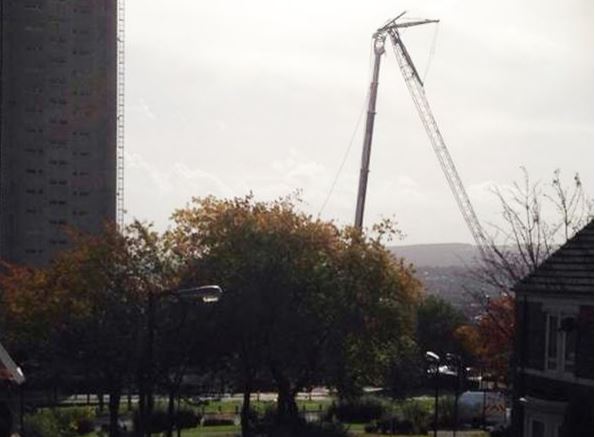 According to the Newcastle Chronicle, a man has been injured as a crane, that was being dismantled because of high winds, collapsed on a Wates building refurbishment project. The Chronicle says the man was taken to Newcastle's Royal Victoria Infirmary suffering from facial injuries.

The crane was being used on the 20-storey high rise Cruddas Park flats. Residents describe it as coming down with an 'almighty bang'. A worker said the crane had not been in use on Saturday when the accident happened and was being lowered at the time. It is not yet clear if the injured man had been operating the machine, said to be worth around £2m or was on the ground when he was injured, at around 1pm on Saturday.

The crane had been hired by Wates Living Space in London, working for Your Homes Newcastle.

The Chronicle on the spot

The Chronicle reports an eye witness statement from Joel Bostock, 41, who lives nearby: “The crane was turning around when I think a cable came loose and whiplashed one of the workers.

“St Michael’s Roman Catholic Primary School’s entrance is near there and if it happened on a school day, who knows what could have happened.”

Anthony Chance, 49, of Fenham, Newcastle, who was working nearby, said: “The gib was half way down when it fell.”

Another man said: “It is a monster of a machine and could have caused a serious injury.”

A spokesman for Wates Living Space said: “Due to today’s adverse weather conditions, we undertook a controlled dismantle of the site crane in-line with our strict health and safety policy.

“We will instigate an internal investigation to determine the factors behind the incident and in the meantime, we are working closely with Your Homes Newcastle to ensure they remain fully informed of the situation.”

David Langhorne, director of property services at Your Homes Newcastle, said: “We have been in close correspondence with Wates throughout and are satisfied the factors behind the incident are being investigated further.”

Wates Living Space develops and maintains affordable housing in the UK. It has won a variety of safety awards and produces videos on the subject.

The last Concorde ever to have been built - and thus the last ever Concorde to take to the skies - is to go on show at  Aerospace Bristol, a new and massive museum...