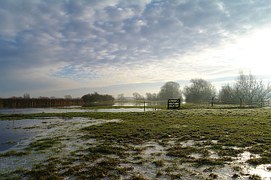 Interserve has been awarded a two year account extension with the Environment Agency worth over £11 million.

Interserve’s partnership with the Environment Agency began in 2013 when it started providing a range of facilities services including maintenance, cleaning and security across more than 100 locations.

David Scholey, Deputy Director of Facilities management at the Environment Agency, said: “We’ve established strong relationships with Interserve over the past three years. The smooth running of our estate is critical to day-to-day operations – to have continuity of service for a further two years is great news for the Agency.”

Interserve has also won a place on the Department of Health’s £4 billion ProCure22 (P22) construction framework, which is due to start on 1 October 2016.

The award continues Interserve’s 14-year role on UK health frameworks, through which it has delivered over £1 billion worth of diverse healthcare facilities across more than 250 projects, including the UK’s first Proton Beam therapy unit, currently under construction at The Christie in Manchester.

Interserve is one of six companies that have been awarded a place on the framework.

Adrian Ringrose, Interserve’s chief executive, said: “P22 is strategically very important to our long-term business objectives in the healthcare sector. Ever since the first pilot framework was launched in 2002, we have sought to deliver high quality clinical space for the NHS.

“We have been working towards securing a place on the P22 Framework since 2014. Together with our existing clients and supply chain, we have sought to balance the complex needs of the sector with the provision of consistent and capable supply side teams that can help the NHS drive efficiency in its capital resource allocation.

“This has involved investment in many areas of the construction process such as programme level IT infrastructure, web services and communications as well as the training and development of our people.”

Serco has confirmed that it has become the preferred bidder for the Barts Health NHS Trust soft fFacilities management services contract worth £600 million over a ten year period. However, as there is currently a mandatory standstill period the contract is awaiting a signature.

Salford Royal has entered a contract with Vivark, a property refurbishment and facilities management company, to carry-out refurbishment, alterations and estates services work to all the various properties at the Salford Royal NHS Trust Foundation site. The deal is worth £2.5 million.

The Styles & Wood Group has bought Keysource - a provider of specialist technical services to the data centre and critical facilities sectors.

The Group has acquired the entire issued share capital for an initial consideration of £2 million in cash and shares, with up to £5 million payable as deferred consideration. .

60 staff and the Keysource executive management team, which will remain with the business.

Macro has been awarded a new five-year contract by Transport for London to manage the operations of the five year old Emirates Air Line - the cable car ride built in...

On The Right Track To Better Health

Sodexo has won the Doncaster and Bassetlaw Teaching Hospitals NHS Foundation Trust contract and Chesterfield Royal Hospital has also confirmed an extension to...

A Bit Of An FM Feast

365 of the UK’s best loved chefs have collaborated with Charitable Bookings alongside leading restaurants, private members clubs and 5 Star hotels by donating their...