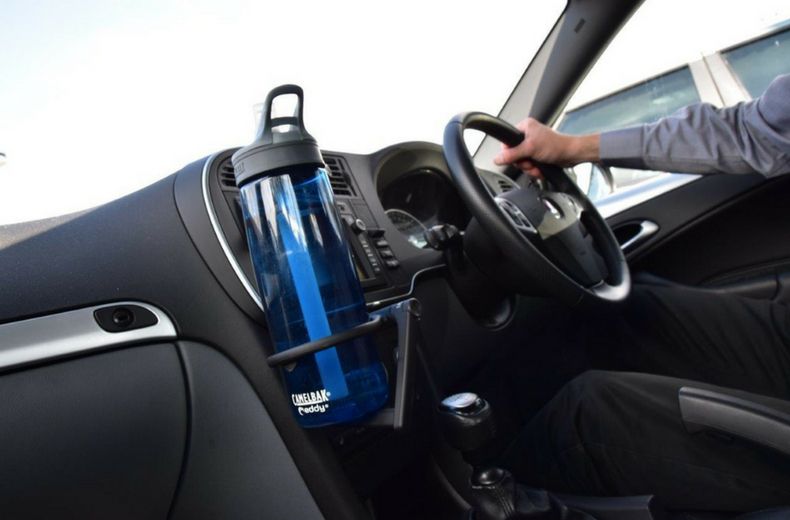 Staying hydrated while at the wheel is imperative.  Fleet operators and individual drivers have been warned that not taking enough water, air-con mistakes and hay fever remedies could all lower driver reaction times - especially during the current UK heatwave.

Car interior temperatures exceeding 35°C is the equivalent of 0.05% blood alcohol reading, according to SEAT which says switching the air-con on full blast without ventilating the car is one of the five most common mistakes.

According to SEAT, common air-con mistakes – including immediately turning the system on full-blast – could be reducing its effectiveness, resulting in higher interior temperatures and possible dehydration.

With outside temperatures recently soaring above 30°C in the UK, hurried commuters and company car drivers in particular could be at risk of dehydration.

Cars parked in the sun can reach a startling 60°C. To help reduce cabin temperatures before setting off and while on the move.

Turning on the air conditioning full blast as soon as you get in the car. When entering a hot car, it’s tempting to turn the air-con on to maximum. However, turning on the air conditioning straight away without opening the windows will just recirculate the hot air. Instead, open the doors, lower the windows for a minute or two before shutting the doors and cranking up the A/C.

Keeping the air recirculation option activated. Keeping it on can make the windows fog and reduce visibility. Most cars will have an ‘Auto’ option, which can regulate itself to prevent fog while keeping drivers and passengers cool.

Not turning on the air conditioning in the morning. Some summer mornings can be cool, yet it’s still a good idea to keep the A/C on to prevent windows from fogging up when the outside temperature rises.

Pointing the air jets toward you. It’s tempting but it’s counter-productive and stops the car getting an even distribution of airflow. Pointing the jets upward lets the cool air spread around the car more effectively and allows it to reach all occupants.

Ángel Suárez, an engineer at the SEAT Technical Centre, says: “Open the doors and lower the windows for a minute before turning on the air conditioning to naturally lower the temperature in the interior.

"If passengers say they can’t feel the cool air, then the nozzles could be set incorrectly. It isn’t a matter of temperature, but in which direction the air is flowing inside the car. The nozzles should be pointing upwards, not towards peoples’ faces. Then the air flows all around the interior of the car and reaches every passenger consistently.”

It's Important To Drink And Drive

We all know that driving with too much alcohol in our system is illegal and can endanger lives. But according to the RAC did you know that driving while dehydrated can have much the same effect on driving ability as a couple of glasses of wine?

In fact, there are a number of things that can significantly affect your driving ability that you might not be aware of.

Read on to find out what common occurrences can cause unnecessary danger while you're driving and how to prevent them.

While many of us top up our oil, coolant and windscreen wash before going on a long journey, few of us consider our own fluid levels.

Driving in a stuffy car on a hot summer’s day can cause you to lose significant amounts of water. Being dehydrated affects your concentration levels and co-ordination.

The majority of UK drivers don’t know the symptoms of dehydration. These include:

When motorists were put through a series of tests on a driving simulator by scientists at Loughborough University to assess the effects of mild dehydration on reaction time and performance, the results were startling.

They made twice as many minor errors when dehydrated as they did while hydrated – the same number as those who have been drink-driving.

That’s because concentration and alertness were significantly reduced. Errors included drifting out of the lane as well as braking too early or too late.

According to the Department for Transport, driver error is the biggest cause of road accidents in the UK, with 68% of crashes as a result of this.

What you can do to stay safe

Make sure you drink enough fluids before setting out on car journeys, even if it means taking regular toilet breaks along the way. Don’t overuse the air conditioning as this can have a drying effect on the atmosphere.

If you do feel tired while driving, stop for a drink that contains caffeine or sugar to give you a boost or take a rest until you feel more awake.

With hay fever affecting an estimated 13 million people in the UK, many motorists will take some form of medication when pollen levels rise to try to relieve symptoms such as a runny nose and itchy eyes.

But some antihistamine tablets can cause drowsiness, nausea and blurred vision, as well as affect reaction times – all of which make you more likely to have an accident.

If you do cause a crash, you could end up with a criminal record. The police can ask you to do a ‘field impairment assessment’ and take a roadside drugalyser test. If they think you’re not fit to drive, you’ll be arrested and could be prosecuted.

A conviction for drug-driving carries a minimum one-year driving ban and an unlimited fine. In extreme cases, you could receive a six-month jail sentence.

So always check the label of any medication you take before getting behind the wheel. If in doubt, ask your pharmacist if it could affect your ability to drive. Some remedies are covered by the same drug-driving laws as cocaine and cannabis.

If your symptoms are mild, stick to nasal sprays and eye drops that won’t cause drowsiness. Keep windows closed, even when parked – if left open they can trap pollen in the car.

Many of us don’t think twice about driving home from the airport after arriving back from holiday. But driving while jetlagged is potentially dangerous as your body clock may be out of sync.

Travelling through several time zones can disturb your sleep patterns and make you feel less able to concentrate. The bigger the difference between time zones, the more likely it is that you could suffer from jetlag.

If you’re travelling long-haul through several time zones, consider getting a taxi to and from the airport so you won’t have to drive at all. Another option is to check into a hotel near the airport to get some shuteye before going home.

If you’re already driving home and start to feel sleepy, pull over at the nearest service station to get some food and drink. Caffeinated drinks such as coffee should perk you up. Eat something to give you slow-release energy, such as porridge, wholemeal toast or a banana.

We Brits love a cuppa, but did you know that some herbal teas can make you feel drowsy?

Herbs such as chamomile, lavender and valerian are known to have mild sedative properties to help you relax. So, while they may be good for helping you to nod off at bedtime, they’re not recommended for people who are about to get behind the wheel of a car.

Although there have been no reports of herbal teas causing accidents, they could potentially make you feel less alert behind the wheel, so drink (tea) and drive with caution.

Those of you who like a brew in the morning before heading off to work should ideally stick to beverages with caffeine. Also, avoid adding honey. Honey has glucose in it, which research has shown hinders the production of orexin, a hormone that makes us feel awake and alert.

Picture: Make sure you drink and drive.

With Summer holidays across much of the UK now in full swing, many families will be setting off on staycations. However, new research commissioned by Europcar UK has...