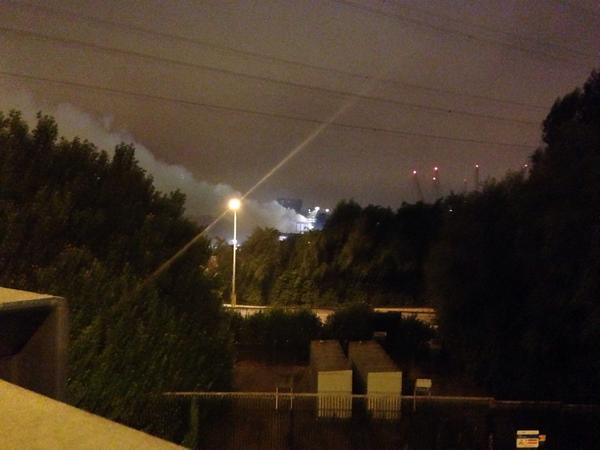 A warehouse fire in London's Canning Town (an area close to the Olympic stadium and park) saw 70 firefighters at the scene at the height of the blaze which was reported at half-past midnight this morning.

At the time of reporting (09:15 Tuesday 15 July), there are stoill six fire engines and 35 firefighters and officers currently at a recycling warehouse. The blaze is affecting about 400 tonnes of recycling materials. Although the warehouse is on an industrial estate smoke from the fire is drifting so residents affected are being advised to keep their doors and windows closed.

Station Manager Paul McClenaghan who was at the scene said: “An eight metre stack of about 400 tonnes of domestic recycling materials is on fire. Crews are working hard to bring the blaze under control and to stop it from spreading to neighbouring buildings on the industrial estate. We're making steady progress but the fire is producing large plumes of smoke which are drifting so any residents who are affected are advised to keep doors and windows closed.”

As the third of 15 periods of FBU industrial action taking place between 14 July and 21 July got underway at 06:00 this morning, four contingency fire crews were mobilised to take over from London Fire Brigade firefighters at the incident. The contingency crews remained at the scene until the end of the strike period at 08:00 when London Fire Brigade crews returned.

At the height of the incident 10 fire engines from East Ham, Ilford, Plaistow, Stratford, Shadwell, Millwall, Homerton, Dagenham, East Greenwich and Tooting fire stations were at the scene. The Brigade’s fire boat  also attended the incident.

The cause of the fire is not known at this stage.