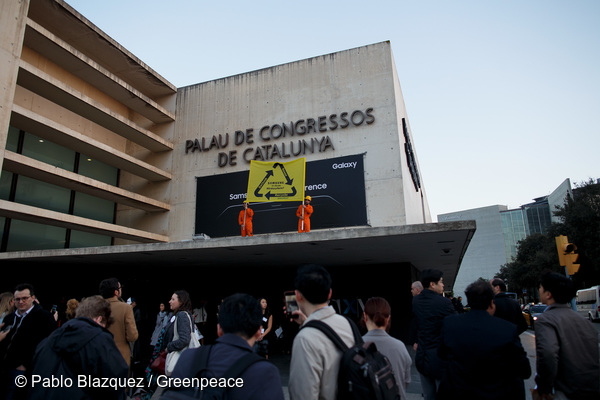 Smartphone production and disposal over the last 10 years is proving to have a significant impact on our planet, according to a Greenpeace USA report released Feb 26.

The report shows roughly 968 TWh was used to manufacture smartphones since 2007 - nearly the equivalent of one year’s power supply for India - and the devices contribute significantly to the 50 million metric tonnes of e-waste expected to be generated in 2017.

The report was released as Greenpeace Spain activists attempted to unfurl a banner from the building where Samsung was holding a press conference at the Mobile World Congress in Barcelona with the message 'Reuse, Recycle, Rethink'. The activists are demanding Samsung reuse and recycle the 4.3 million Galaxy Note 7s  recalled in 2016 following reports the devices were exploding or catching fire.

“What has happened with Samsung’s recall of the Galaxy Note 7 is indicative of a wasteful and unsustainable system. Rushed design and production cycles can lead to wasteful mistakes, not to mention the impact on our planet,” said Jude Lee, Global Senior Campaigner at Greenpeace East Asia. “Samsung still hasn’t shared a clear plan to deal with the 4.3 million phones that it recalled. If Samsung is serious about making sure this never happens again, it must lead the IT sector and move towards a system that allows phones to be more easily repaired, reused and recycled.”

COVID-19 Testing in the Workplace – What Do Employers Need to Consider?

With businesses interested in conducting their own private workplace coronavirus testing for employees, what do employers need to bear in mind? The government’s...