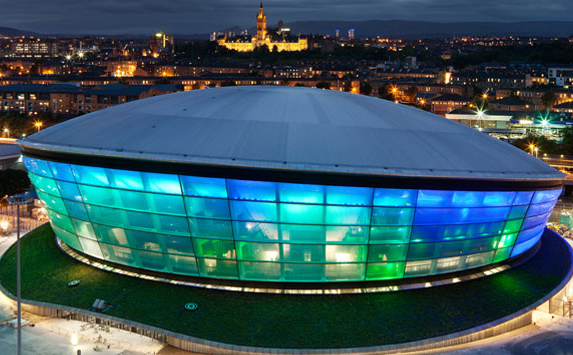 The brightly lit exterior of The Hydro is now well recognised here in Glasgow but last night saw the general public get its first opportunity to utilise the fabulous Hydro a huge brand new music and entertainment venue dubbed The Spaceship. Rod Stewart was last night’s headline act as the arena opened to a sea of eager Tartan clad fans.

ThisWeekinFM attended an official press opening last Thursday which focussed some attention on the facilities energy credentials – not surprising since Scottish Hydro (part of SSE) has the naming rights. This correspondent also attended the first show. Some of the fans had been queuing since the early hours to grab prime slot in front of an absolutely massive stage. The arena is purpose built to have seats on three sides with a standing area at the front.

Stewart will play throughout the week – with Scottish Hydro subsidising tickets for customers as it will continue to do as part of its sponsorship package. The crooner and rocker, now 68, declared: “We made it.” He has been a supporter of the £125million development since it was first muted and has kept up to date with its progress – travelling regularly from America and his birthplace in London and on this occasion, all the way from Argentina.

The Hydro was conceived by Foster & Partners and is envisaged to compete with international indoor arenas around the world. The financiers of the project expect a handsome return on their investment and are confident that the state of the art, purpose built facility will attract top name acts  and large audiences – it can hold 13,000.

The project was commenced in early 2011 and has arrived on time despite a fire during construction.