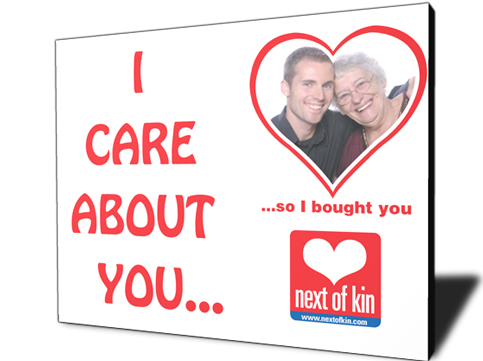 The Next of Kin Card is already carried by more than three million people but with 19,707 major injuries to employees such as amputations, fractures and burns just reported by the HSE for 2012/13 and 195,723 reported casualties on British roads in 2012, it is argued that one could be the reason a friend or loved one gets a second chance at life.

Although many people carry personal information around with them, it is often difficult for first responders, paramedics, and the police to know who to contact in the event of an emergency. Designer, Lee Hemington, explained: “I came up with the idea after my mother, Faye, was in an accident and fell into a coma. She was given only 48 hours to live by the emergency services. It took the police five hours to track me down and contact me, at which point I was able to give vital medical information about my mother which saved her life but in those hours it could have been too late. Had she been carrying a Next of Kin Card, the emergency services would have known how to get hold of me immediately.”

The card has featured on national television and been supported by many celebrities, including Bruce Forsyth, Ronnie Corbett and Joanna Lumley.

Despite its popularity, the card is using its anniversary to remind young and old that fast contact with family in an emergency can be the difference between life and death.

Research, educational and professional publishers, Springer Nature, were looking for a space saving and environmentally friendly water solution for their UK headquarters...