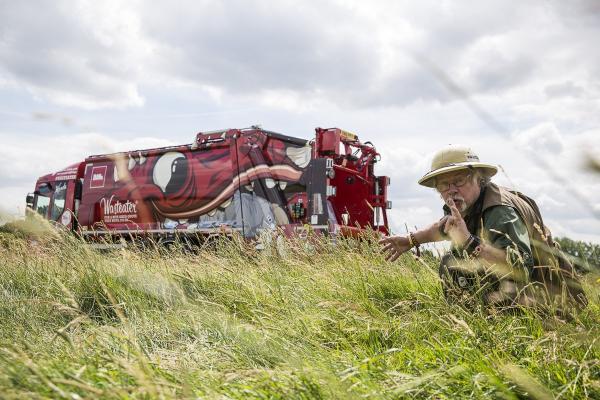 Waste collecting giant Biffa reckons it might start its own spotting craze in the UK following the launch of its new breed of dustbin lorries, dubbed the Wasteaters.

Each truck has its own eye-catching characteristics, name and personality and each serves a different UK city - 12 cities in all. Members of the public - especially children during the school holidays are being encouraged to look out for Walter, Wanda, Willy, Winston, Wendy, Woody and Wilma in their area, take a photo if they spot them to tweet @biffa using #wasteater.

Biffa has launched a dedicated spotter's website, containing tips and profiles of all of the Wasteaters, as well as clues of where they can be spotted. Hunters can visit http://www.biffa.co.uk/wasteater to find out more.

Biffa has enlisted the help of wildlife spotting expert and environment lover Bill Oddie, who is on hand to offer the public his expert advice. He said: "I have made a career out of spotting rare creatures in the wild, so I know all too well how challenging it can be and with just 15 Wasteaters in the whole of the UK, this spotting task is certain to be challenging.

"My initial advice to spotters out there getting started is simple, know your area - these monsters are likely to be lingering somewhere close to their depots. And get outside - take to the streets early if possible, as this is when this species is most active. And most importantly stay alert and safe at all times - spot in numbers and with a responsible adult."

Guy Maddock, group head of marketing at Biffa said: "The trucks have only been on the road for a few days and the reaction to them has been phenomenal. The trucks are launching between now and August in 12 locations - London, Leeds, Bristol, Norwich, Birmingham, Worthing, Manchester, Glasgow, Nottingham, York, Southampton, Middlesbrough."

No Waste in These Awards

RWM 2015, the international event for resource and waste management innovation announced the winner in its search to find the industry’s Rising Stars of resource...