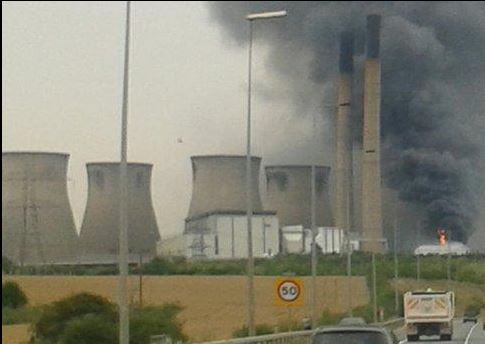 The West Yorkshire Fire and Rescue Service is currently at the scene of a major fire at the Ferrybridge C Power Station.

The Brigade was called just before 2:00pm and ten fire engines are currently in attendance, which includes firfighters from the surrounding stations of Pontefract, Normanton, Featherstone, Castleford and Wakefield.

The third floor of a four-storey building is involved. Firefighters are currently using two ground monitors and one aerial to tackle the fire.

A number of members of the public have called the West Yorks control room due to the plumes of smoke which can be seen in the surrounding area.

At 3:21pm it was confirmed that all persons are accounted for with no injuries to report. At 3:26pm the incident was escalated to 15 pumps.

Picture with thanks to Alice Richardson