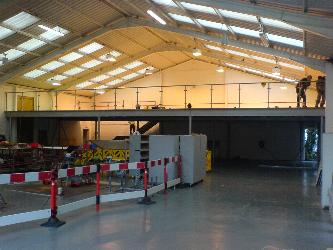 4 January 2017 saw a Lincoln based Construction Company, specialising in fitting mezzanine floors, prosecuted after a contractor fell onto a concrete floor.

Guildford Crown Court heard that M & L Installers Ltd were contracted to install a mezzanine floor at a factory in Sunbury on Thames, Surrey. The design included a hole in the mezzanine floor where a lift was due to be installed.

A contractor who was working on the floor fell just over 3.5 meters and suffered life threatening injuries, when he stepped backwards through the hole, on 13 January 2015. He was hospitalised for two months after receiving a server brain injury any has not been able to work since.

An investigation by the Health and Safety Executive found that the company failed to guard the hole for the lift or board it up preventing anyone from falling through.

HSE Inspector, Amanda Huff, commented after the hearing: “The contractors injuries were life changing and he could have easily have been killed. This serious incident and devastation could have been avoided if basic safe guards had been put in place.”

3 January 2017 saw an engineering company sentenced for safety breaches after two of its workers were burned when they were sprayed with chemicals during chemical cleaning of a pipework system.

Newcastle Crown Court heard that on 31 July 2014 two employees of PSL Worldwide Projects Ltd received serious burns while working at a Hyclone UK Ltd site, in Cramlington. The workers were using Sodium Hydroxide granules to clean a pipe system. A reaction occurred between the chemicals and water in the system that caused the liquid to heat up building up pressure in the hose. The hose detached and sprayed the two workers with the solution, causing severe burns.

An investigation by the HSE identified that the task was not adequately risk assessed by PSL Worldwide Projects Ltd, the equipment provided to do the job, in particular the hosing, was not suitable for the solution and the company failed to provide adequate personal protective equipment to its employees.

PSL Worldwide Projects Ltd of Bridgewater Lane, Washington, Tyne and Wear, pleaded not guilty to breaching Section 2(1) of the Health and Safety at Work Act 1974 on 28 November 2016 at Bedlington Magistrates Court but they were found guilty and the case was referred to Newcastle Crown Court for sentencing. They were fined £150,000 by Newcastle Crown Court. No costs were awarded due to the company being in liquidation.

After the hearing, HSE inspector Laura Catterall commented: “If a suitable risk assessment had been undertaken it would have identified that the equipment being used was not right for the chemicals or the work being carried out. All companies who work with high hazard chemicals should learn from this case and ensure that their workers are properly protected.”

Picture: A typical mezzanine floor installation - this is for illustration purposes only and is not the site of the accident prosecuted on January 4