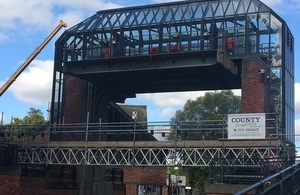 MPs from the Environment, Food and Rural Affairs Committee have called for an overhaul of flood management in England to tackle the rising risk to communities from climate change in a report on future flood prevention.

Our proposals will deliver a far more holistic approach to flooding and water supply management, looking at catchments as a whole. Flood management must include much wider use of natural measures such as leaky dams, tree planting and improved soil management. And some areas of farmland should be used to store flood water."

The Committee recommends a new governance model with a new National Floods Commissioner responsible for flood management in England. S/he would agree with the government strategic, long-term flood risk reduction outcomes and be held to account for their effective delivery via:

Parish MP: "Our proposed model would streamline roles and pool expertise to allow bodies to deliver their unique roles. Funding would be firmly linked to outcomes: the Commissioner would hold the new English Rivers and Coastal Authority to account on whether it spends its budgets efficiently - whether by directly undertaking work or by commissioning projects from catchment partnerships or Internal Drainage Boards. New Regional Boards would enable a close link between national plans and local aims."

Building regulations must be tightened

Parish aded: "Building Regulations must be tightened up to help flood proof our properties if a voluntary code is not agreed by the end of this year. Developers who flout planning rules in high flood risk areas must also be penalised."

Developers who fail to comply with planning requirements should be made liable for the costs of associated flooding across a catchment; Water companies should be made statutory consultees on planning applications, and the right to connect surface water to a sewerage system should be removed;

The Government should develop by the end of 2017 a grant scheme for small businesses unable to secure affordable insurance to install resilience measures; and

The Environment Agency and Met Office should develop clearer methods of communicating flood risk by the end of the year. Current descriptions of a '1 in x year' flood risk are confusing.

Picture: The Foss Barrier will be able to process an Olympic size swimming pool worth of water in just 50 seconds – a 66% increase in capacity - thanks to the installation of new state of the art pumps, Environment Secretary Andrea Leadsom announced recently. The pumps form part of a £17 million upgrade to York’s key flood defence, which includes ongoing work to raise the pumping room next year.