Food Glorious Food for the Workplace 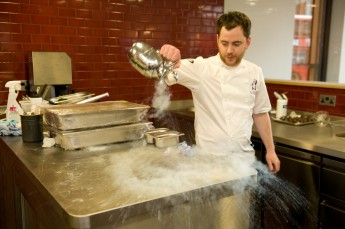 City fine dining specialist Lusso entered a partnership with chef Tom Sellers to take a menu inspired by his Michelin-starred Story restaurant into workplace dining for the first time.

Under the name Tom Seller’s, Signature for Lusso the menu includes dishes that will be familiar to visitors to Sellers’ restaurant, including venison loin and desserts of pumpkin, cardamom and burnt clementine.

His restaurant opened in April 2013 and gained its first Michelin star only five months later after a career working with some of the world's greatest chefs, including Tom Aikens, at Thomas Keller's French Laundry and at Noma with René Redzepi.

For its part, Lusso is expanding its culinary ambition at a time that it also reports commercial growth with more than 100 chefs serving 14,000 meals daily at 35 sites. Clients include blue chip businesses working in accountancy, banking, barristers’ chambers, law practices and globally famous consumer brands.

Tom Sellers said: “I am really happy to be working with Lusso and bringing Story’s dishes outside of the restaurant walls,” said Tom Sellers. “My team at Restaurant Story is constantly striving and we all hope our food inspires Lusso’s clients; perhaps they will even stop by for seconds.”

Picture: Michelin-star chef, Tom Sellers, has entered into a partnership with Lusso to provide fine dining in the workplace