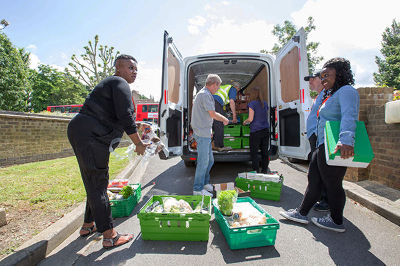 The world’s top 100 cities – London among them - will generate 35% of global economic growth over the next ten years, yet the benefits of that growth are not evenly distributed.

As a result of this economic realty, large urban centres face certain issues and challenges that must be addressed to create a more equitable future for all of their residents.

Prominent among these issues are food waste and food poverty, which have negative impacts on the health and wellbeing of Londoners as well as the environment we all share.

Citi is partnering with the Evening Standard, London Community Foundation and the Felix Project to help people and communities come to grips with food waste and food poverty.

This partnership gives Citi an opportunity to play a major role in making progress on these critical societal issues. The problem of food insecurity is not unique to London. Citi and the Citi Foundation are already engaged in the provision of funding and volunteer support to initiatives in New York, Madrid and Sao Paulo. In New York, Citi Community Development has long-developed partnerships with the Food Bank for New York City and City Harvest, both organisations working creatively to tackle food and financial poverty.

28% of London’s population – approximately 2.2 million people - population lives in poverty. Over 500,000 Londoners are believed to be living with food insecurity. The Felix Project will directly support these individuals by collecting surplus food from food suppliers and distributing it to local charities, so they can provide healthy meals for their clients.

Last week, in an unprepossessing shed in west London, we launched The Felix Project in memory of my son. The concept is breathtakingly simple. Our supermarkets and the food industry throw away more than four million tons of food each year, while many of our fellow Londoners don’t get enough to eat and many eat no fresh food at all.

This glaring mismatch of supply and demand is the sort of thing that attracts an entrepreneur like me. That supermarkets send good, fresh food, which is about to reach its often artificial sell-by date, to landfill or spoil it for foragers by pouring bleach over it seems to me obscene. This is surely a 2016 scandal that is waiting to break.

That there are still people who can’t afford to feed themselves and their families in the seventh-richest country on Earth shames us all. Some of those I talk to at the top end of the social scale have no idea what is going on at the bottom end. They should visit a St Mungo’s homeless hostel or one of the many other extraordinary charities that have recognised this fact and are doing something about it.

The French recently passed legislation that prevents supermarkets from throwing away or spoiling unsold food but we are some way behind here. Meanwhile we dump more food than any other country in the EU. Moreover, many people are unaware that supermarkets benefit indirectly from most food banks, which recycle lower-quality products such as biscuits, crisps and canned food, donated by supermarket customers.

With an initial arrangement to collect fruit, vegetable, dairy products and bread from Asda, Waitrose and Booker, The Felix Project is now delivering food daily to selected local partner charities such as the Sufra Food Bank and Kitchen and St Mungo’s, which have committed to prepare fresh and healthy meals for the people they care for.

Based on the inspirational Oxford Food Bank model, which delivers £20 of fresh food for every £1 it raises in donations (another performance indicator to attract the interest of the entrepreneur), The Felix Project is a different take on the traditional food bank. We are focusing on good-quality, fresh food. We work as an intermediary between supermarkets and charities, rather than directly with consumers, so that we can maximise our effect. We don’t charge either our charity partners or our food suppliers, as some others do, but we seek the active collaboration of the big supermarkets and the commitment of charities to prepare fresh meals daily.

If our pilot scheme in Park Royal works, and I think it will, then we will quickly extend our reach right across London and widen the number of food suppliers and charities we work with.

It is estimated that 500,000 children in the UK go to school hungry, many of them in London. Statistics like these can, and should, be challenged but sometimes personal and anecdotal evidence is equally compelling. I will never forget Felix’s shock, playing in a football tournament against a team of London boys from the Greenhouse sports charity, when he understood that most of these 10-year-olds had had nothing to eat that day. He bought them a lunch of sorts, ice cream and chocolate.

Felix had great compassion for those who had none of the advantages he had. I hope this project will honour our boy.

Picture: The Felix Project will benefit from the input of the London Evening Standard and Citi