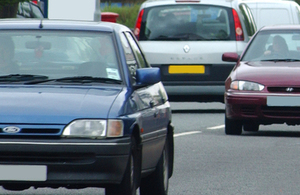 A £2 million fund to allow councils to capitalise on emerging technologies was launched on August 11 and local authorities have been invited by the Department for Transport to apply for a share of the money to develop projects.

Proposals could include using technology that will allow vehicles to communicate with each other and roadside sensors to provide the drivers with real-time traffic information.

Councils can also look at how warnings about changing weather and traffic conditions can be sent directly to vehicles, so drivers can plan ahead - helping deliver quicker, more efficient and safer journeys.

Under a previous scheme, Westminster City Council has been building an app that directs drivers to empty parking spaces in central London and then takes payments automatically for using the spot.

They have until 5:00pm on Friday 30 September 2016 to submit their bids and successful councils will be revealed in November. Schemes would be expected to complete by March 2018.

Roads Minister Andrew Jones said: "Britain has a proud history of innovation. Councils will be able to use this money to develop systems to make journeys easier and safer."

Electronic bids should be sent to traffic.comp@dft.gsi.gov.uk

A consultation to help pave the way for automated cars to be used on British roads was launched week ending July 15 and is expected to last nine weeks. Under the...