Heard it Through the Grapevine 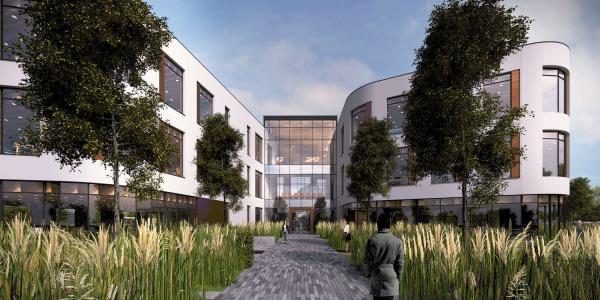 Telephone answering specialist company Moneypenny has unveiled its designs for a £15 million headquarters that it claims will rival the likes of Google and Apple.

The 91,000sqft office which will have a capacity to house up to 1,000 staff, is being built in Wrexham and will have a treehouse, a village pub, and a triple height 8,000sqft atrium with a restaurant and stadium seating.

It will also have a 10-acre plot with nature trails, orchards, vegetable gardens and views over the surrounding countryside.

Among the features that have been considered to create the ‘perfect environment’ for call handling – and which was made possible working with AEW Architects on the project – was the use expert sound engineers to create bespoke technology that will absorb sound and eliminate background noise.

The new campus has been designed to be one of the most environmentally sustainable commercial projects in the country. By using rainwater recycling, solar energy, ground source heating and natural ventilation for climate control, the company aims to be almost entirely self-sufficient.

“We’re thrilled to unveil the designs for our new headquarters,” said Ed Reeves, Co-founder and Director of Moneypenny. “This marks the start of an exciting new stage in Moneypenny’s life and we’re confident it will be one of the most advanced buildings of its kind in the UK. The development has already been likened to a ‘Google of the North’ which is a huge compliment, but we’d actually like to venture one step further and say that our new campus will be even better.”