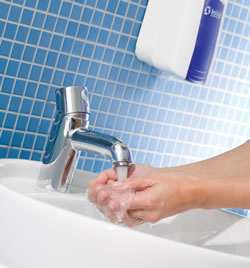 Research published by Initial Hygiene suggests that parents may be endangering their children’s health by taking a ‘laissez-faire’ approach to hand hygiene.

A survey of primary school children and their parents has shown the former lags behind latter when it comes to handwashing with over 40% of youngsters saying that they do not always wash their hands with soap after using the toilet and almost three quarters admitting they failed to wash before every meal.

The research main points are:

Just over two thirds of the children surveyed said that their parents played the biggest role in influencing their hand-washing habits, suggesting that lax parental attitude towards hand hygiene is the reason behind their poor attitude.

Microbiological testing conducted by Initial showed that 20% of children’s hands are home to ‘heavy’ levels of bacteria which pose a risk of cross-contamination. Boys’ hands were found to be dirtier than girls’ and those aged eight had the highest average levels of bacteria on their hands among the focus group of seven- to 11-year olds.

The research was published ahead of Global Handwashing Day that encourages better hand hygiene practices in order to reduce the spread of infectious diseases.

“Parents’ belief that their children may be ‘too hygienic’ is alarming as some of the bacteria and viruses which can be carried on hands can have serious consequences,” explained Dr Peter Barratt, Technical Manager, Initial Hygiene. “Many common pathogens can be carried on hands, from Staphylococcus and E. Coli to Norovirus and influenza. Regularly washing hands with soap and water has been proven to reduce the risk of spreading these types of pathogens, and so it is up to parents to educate their children on how handwashing can help them stay fit and healthy.”

Picture: Research shows parents may be endangering children’s health with a ‘laissez-faire’ approach to hand hygiene

Kimberly-Clark Professional - the paper towel company - has attacked the use of hand dryers again, inviting visitors to a specially convened website 'to discover The...

Washing and Drying - Handling the Myths

Researchers in Florida have found that there is statistically little difference whether hands  are washed in hot or cold water. Most of us know just how important...

For Hands That Do

Paul Jakeway explains why workplaces should think beyond the provision of handwashing opportunities – and implement a structured skin care programme that keeps the...

A mild antimicrobial handwash that is effective against a wide range of potentially harmful micro-organisms as well as not harming the skin from frequent washing has been...

With UK students back at school full-time after over 18 months of interruption, contractors are also back, making sure facilities within school buildings are up to...