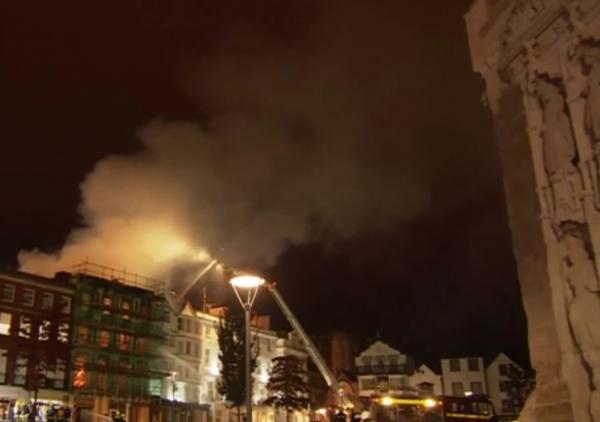 Devon & Somerset Fire & Rescue have been battling a blaze this morning (Friday 28) since just after 5 o'clock at a block of buildings containing The Gallery and the Cathedral Yard adjacent to the historic Exeter Cathedral.

The buildings comprise five floors and approximately 900sq.m.  The fire spread alongside to the Royal Clarence hotel.

Such was the conflagration, a large volume of calls was received. The first crews to arrive quickly assessed the situation and realised a total of ten fire appliances and also one aerial ladder platform would be needed.

A message was passed that not all persons were accounted for, so another five fire appliances and another aerial ladder platform were called for.

The fire has been declared as a Major Incident.   However, all persons have now been accounted for.

Crews are currently at work (as at 9:30am) using six breathing apparatus, one main jet, two monitors from a hydro platform, two ground monitors. A drone has been brought to the incident to provide assistance.

Police closed off the area while fire crews tackled the blaze. The Royal Clarence Hotel has been evacuated as a precaution and all staff and residents are accounted for.

It is not known at this time where or how the fire started or how many properties have been affected. No injuries are reported.

According to the BBC, Historian Dr Todd Gray said: "The Royal Clarence is the building that first declared itself as an hotel. Before that we had inns but they took the new French word and applied it to their building. This was the place to stay.

"All these buildings have medieval origins and the buildings in between are very fine 17th century buildings of Exeter at its height. So whatever you see from the outside, it's got a deeper, more interesting past just behind the plasterwork."

Picture: A Major Incident in the historic area of Exeter has seen fire spread from cathedral properties to the Royal Clarence Hotel