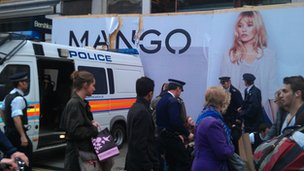 A shop fitting company has been fined for the collapse of a hoarding in London’s Oxford Street that caused injuries to passing pedestrians. Shoppers were crushed when a large hoarding collapsed in the heart of Oxford Street less than 24 hours after it had been erected.

The hoarding, which was approximately 3.6m high and weighed nearly 1 tonne, had been put up the previous day by Wiltshire-based Oracle Interiors to fence off a clothing store that was being refurbished.

Four people were injured, three seriously, in the incident on 7 March 2012. They included 25 year-old Charlotte Hammond, from Romford, who sustained an open fracture of her right ankle that required extensive surgery.

The shop fitting firm was prosecuted this week after an investigation by the Health and Safety Executive identified serious flaws with the temporary structure.

Westminster Magistrates’ Court heard the hoarding was held in place by a single timber brace. As such it was inherently weak and was not designed, or installed to sufficiently withstand gusts of wind or knocks from passing shoppers, both of which should have been factored in.

The hoarding trapped an estimated 20 people when it came down, although most managed to escape unharmed as emergency crews and fellow passersby rushed to help.

Injuries sustained by the other victims, none of whom wanted to be identified, included broken bones in the back and crushed nerves in an arm.

Oracle Interiors, Salisbury, was fined £10,000 and ordered to pay £13,069 in costs after pleading guilty to a single breach of the Construction (Design and Management) Regulations 2007.

“The law clearly states that all temporary structures, including hoardings, are properly designed, and so installed to withstand any foreseeable loads imposed on it,” explained Wendy Garnett, HSE Inspector, after the hearing. “Charlotte and others could easily have been killed by the hoarding and they were completely unaware that it posed a risk – not only to them, but to the tens of thousands of people who walked along Oxford Street that busy afternoon. Oracle Interiors could and should have done more to prevent the collapse.”

Pictured: The hoarding collapse in London’s Oxford Street could have been avoided if the shop fitting company had taken appropriate safety measures